my hurricane experience in great detail, weather or not you want to read about it


We’re alive and came out on the other side of the hurricane only slightly worse for the wear.


We knew the storm would hit sometime Wednesday so I spent most of Tuesday preparing and debating whether to evacuate or not. If I didn’t have Annabelle to worry about I would have stayed without much thought, but they were predicting the power would be out for days and that can be miserable with a 4-year-old. Had the powers that be announced we needed to evacuate it would have helped. It was being in the middle and having to decide for myself that I didn’t like. I’m a rule follower and like being pointed in the right direction. You say evacuate and I ask how far. I was worried leaving would make me a wimpy northerner. I was worried staying would make me irresponsible. After several phone calls with my mother in law and more texts with my advisory group, we ended up staying. Immediately after making the decision I second guessed it and yes, it is very exhausting to me in my head.


I did all the laundry in the house, filled up the tubs, cleared out the closet to use as a tornado shelter and got out every candle we owned. I stocked up on nonperishables and water bottles. Christopher did the same and brought home more food than we eat in three weeks. We still have so many packages of lunch meat and loaves of bread we could feed the county for months. Most important, we had hurricane chips and chocolates to see us through. We were as prepared as we could be.

It started raining around supper time. By the time 8 o’clock rolled around the wind was howling and things were banging around. I HATED that it happened at night. Not only did I want to see what was being damaged, I wanted to fully experience my first hurricane. I could see nothing but darkness. The power kept going in and out so we lit all our scented candles and the house smelled like the little perfume stores at the mall. When the power went out for good we went to bad. At that time Annabelle decided it was too scary in her room so we brought her mattress into our room. She had the beginnings of a cold so she sniffled and snuffled all night. Christopher snored all night. I was as fresh as a drowned mouse the next morning.

We had some siding off and branches in the yard but we didn’t have one bit of real damage. We were so very fortunate. The neighbor’s side yard and our backyard are the same piece of land and they had several trees down as well as a few broken windows. All around us homes and cars are damaged and wires are down. It will take some people months to recover. We prepared to be without power for days but ours came back on within 20 hours. Several friends didn’t get power back until yesterday. I think God went easy on us because we’ve already had a tough year. 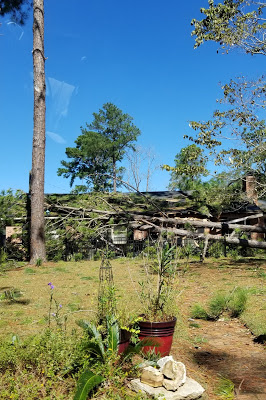 Due to our status as one of the only families in our friend group with power, we issued an open invitation for anyone to come to take showers. On Sunday we went to church and helped serve dinner. Not many people showed up but I’m glad we tried to help.

All in all, we had some siding down, some branches to clean up and a few extra wrinkles and gray hairs from stress.