come to me with all your marriage conundrums

Yesterday was our 8th anniversary.

In years past, I prepared posts and facebook statuses days in advance and scheduled them for the 29th. I made sure everything was done on time. This year I meant to write something on Sunday afternoon but I took a nap instead. “Nap” is a generous way to put it. It was more like an experiment where AB tried to beat her personal record of how many times she can ask for a snack in 30 minutes.

Our friends watched AB so we could go out to eat on Sunday. The restaurant we wanted to visit was closed so we enjoyed a calm and quiet dinner at a second restaurant. Yesterday, our anniversary, I cashed in a facial and massage gift certificate at the spa in the morning and got a haircut in the afternoon. It was a tough day of pampering and someone had to do it so I took one for the team. The lady doing the facial was sweet but she promoted their new procedure for the removal of extra-fine facial hair a little too much. She turned the spotlight directly on my face and said, “Yeah, I think you’d really like that procedure. You’re a great candidate.” Just’s the sort of self-esteem building comment I was hoping to hear!

In honor of our 8 years together, I’d like to share some spiritual lessons marriage tips and tricks. I encourage you to file these notes away for your time of need.

1. Nag, nag, nag. As I said last week if I nag suggest Christopher start a new hobby for long enough he just might do it. I’ve tried this leaky faucet method in other areas without success, but I’ll keep at it.

2. Find a way to live in (somewhat) peace and harmony when your hobby is your spouse’s fear. Christopher has a sewing needle/pin phobia. He HATES them. This presents a problem since I use pins and needles frequently. I like to do cross stitch when we watch a show at night or in the car and he is truly horrified when I drop a needle and can’t find it. I am much more laid back it. I always usually find the needle and if I don’t, we don’t have a toddler in the house who will find and eat it. It’s not like it stands straight up by itself, waiting for an unfortunate soul to step on it and die. When Mom and Elizabeth were here, one of them was doing some mending and a stray needle was on the floor. I made sure he knew it WAS NOT MY FAULT. I HAD NOTHING TO DO WITH IT. DO NOT BLAME ME FOR THE STRAY NEEDLE. 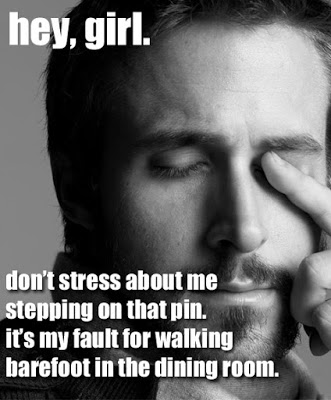 3. Make purchases “for him” that you enjoy. If you, like me, are married to someone who hates confetti, I can point you in the direction of a company that makes a confetti bomb card. I can’t guarantee that it will explode like you hoped and dreamed but please order one for yourself and let me know how it goes. I got him the Father’s Day confetti card box bomb and stalked the mailbox until it came. I don’t think there’s ever been a card I was happier to see. It was a flop but the anticipation of an exploding box of confetti brought me so much joy I might order another for this Father’s Day. Again, let’s be clear that while the card was for him, the entire purchase of said card was for my entertainment.

4. Find common ground in education. Christopher is obsessed deeply invested in BBC news. He’s constantly checking their app and listen to their radio station. I listen to the less globally enlightening but BY FAR more entertaining BigBoo Cast. When I want to tell him something I heard on the podcast, I add little more credibility to what I’m about to share with him by saying, “Today on the BBC I heard…” He doesn’t know which BBC I’m talking about but in case it’s his version of the BBC, he pays a little more attention.

5. Try to fill in gaps in each other’s knowledge. Closely related to number 4, any conversation along the lines of “Did you read the article on ozone layering and how it is affecting the planetary protection of the earth?” usually end with me replying in the negative. But he never knows when Joann’s is having their special 70% off holiday clearance sale so it evens out.

6. They say “Don’t let the sun go down on your anger.” but that’s not always possible. Sometimes you’re angry when the sun comes up because your husband has set alarms to go off every 10-15 from 5 o’clock in the morning to 6:30. I wish I was exaggerating but I looked at his alarms last night and I am not. Use the time before you fall asleep to plan how hard you’ll whack him with pillows when he doesn’t hear the alarms, or remind him that there’s a guest bed right down the hall and a couch in the living room if he insists on so many alarms at such an ungodly hour.

I hope a few of these tips work for you. My 2,921 days of marriage make me qualified to speak on the topic. Christopher is still my favorite husband I’ve ever had so it’s worked out well for me.

I finally made a cross stitch portrait for us. Only three needles were dropped in the making of this project and all three were retrieved. 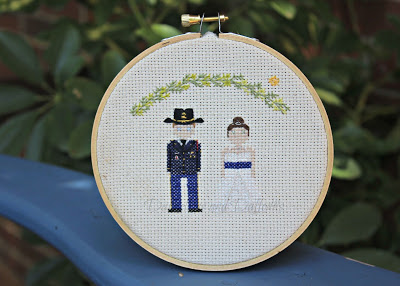 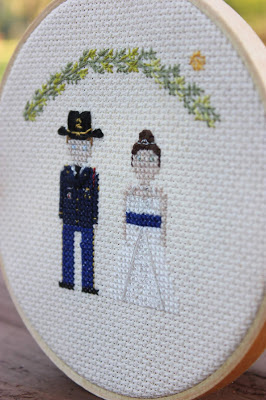