my first writings as a 30 year old

As of the 28th of May, I am officially old. The big 3-0. Feel send me all manner of walkers, canes, orthopedic shoes and hard candies. I’ll be at Walgreens buying a large pillbox for all my medications.


Christopher says 30 isn’t old, but it’s easy to talk that way when you’re not the one with long gray hairs and a rapidly lengthening anti-wrinkle skin care routine.


Our camping trip was partly for my birthday so we were very low-key on the actual day. I had to dispose of a dead mouse in the mouse trap immediately upon waking followed by being sneezed on by Linus. What a lovely start to the day! After AB’s swimming lesson, I went to the flower shop to buy myself birthday flowers. I should have said I wanted to order a bouquet and moved on with life, but I added unnecessary details about them being a birthday gift to myself and I don’t want lilies and I was going to go to the other flower shop but decided on them because their building was on the same side of the street that I was already on, blahblahblah. She asked if I wanted to include a card but I said no. Again, I was sending them to myself so I was expecting them. 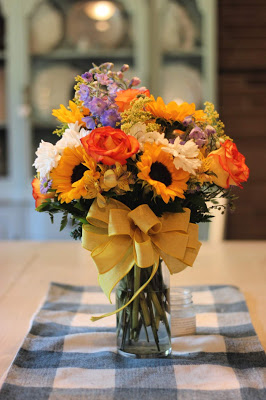 I feel very wise now that I’ve entered a new decade. I shared quite a bit of knowledge with Andrew, Elizabeth, and Christopher. Some are more receptive than others, but I press on. I’m sharing so many pearls of wisdom they’re about to make a full pearl necklace.

Annabelle was in charge of decorating the cake because she knows where the candles are and Christopher doesn’t. She asked how many candles I wanted and said 30 might be too many. I agree. I’d need an oxygen tank to blow out all those candles. 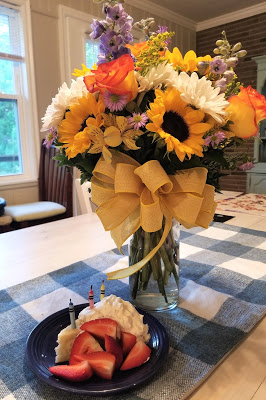 I feel like I had more birthday things to document but I don’t remember what they were. It was 10 days ago but feels like 70 years.

Speaking of time, it’s flying but simultaneously creeeeeping by. Annabelle was only been out of school for two years. I legitimately thought it was a month ago. In those two weeks, I’ve had a birthday, gone camping, done art camp and VBS, put an offer on a house, embarrassed myself in public multiple times, racked up $18.50 in library fines because I got the return date wrong, crawled through the spider-infested woods next to the house several times to catch Linus after he escaped, caught three mice in mouse traps and made the kitchen spotless for a few minutes. That was worth recording. 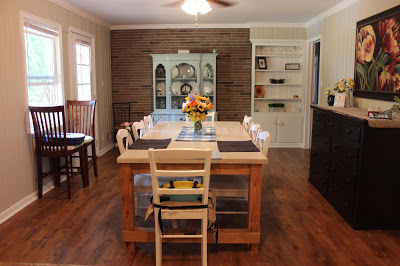 I didn’t plan on volunteering at VBS but as these things always go, I got sucked in because I can’t say no. My plan was to bring AB to VBS at our old church 7 minutes away and spend time at home painting my nails/cross stitching/napping while she was learning about God. Instead, we’re at a VBS half an hour away and I’ve stayed every night to help watch the babies. My friend said she needed help “for one night” in the nursery. She promised me 5 tiny babies under the age of one. That was false advertising. There are no tiny babies. We have three little girls between the ages of 16-21 months. They are very cute and I’d like to bring Cordelia home with me, but it’s been 20 hours of free childcare in 5 evenings. I am, to use our family word for tired, Snooped Dogged. My friend suggested we do foot and handprint art with them and asked if I was good at painting. What I should have said was no. What I did say was I’ve been doing footprint art since Sesame was one month old so no problemo. I’ll do it all. No worries. The moms will love them. I’ve never done it before, but surely I can turn a footprint into a parrot. How hard can it be?

I have never been more dissatisfied with how artwork has turned out. We started them on Tuesday night and I could not for the life of me make them look good. I kept adding paint in hopes they would improve, but they didn’t. The angle of the footprint was off. I couldn’t blend the colors well. I didn’t want any parent to see them. I was annoyed with myself all night. When I saw them again on Wednesday night I will say they looked slightly better than I remembered. Still NOT great, but time healed my injured artist heart slightly. 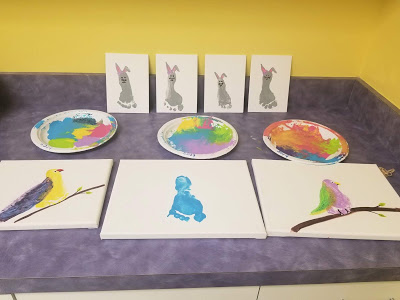 I went to Joanns yesterday for new canvases. I was determined to redo the art, even though none of the kids liked paint on their feet. Sometimes making art is painful, kids! We made footprint bunnies which turned out a million times better. While Annabelle was learning about John the Baptist, I was in the nursery learning to not boast about my paintbrush skilz. 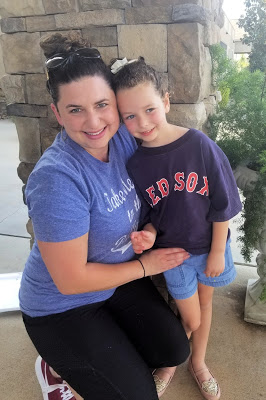