Is this thing on?


In case you’re wondering how few brain cells I have left, I told Christopher we needed to put up the “hag flanger.” I was trying to say we needed to put the flag up and make our house more patriotic. 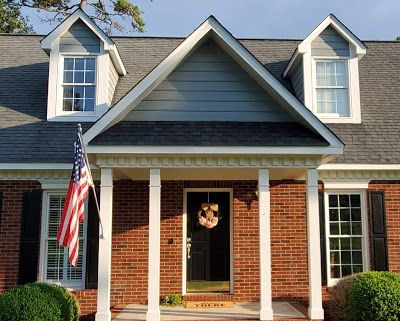 This move has been A LOT. I expected it to go smoothly given the number of times we’ve moved, the fact that we were doing an in-town move, and the two-week overlap between getting in the new house but still having the old house. Oh, how the overly confident movers fall. The house wasn’t 100% set in stone until the week before the move so we hadn’t packed everything. The landlord decided moving week was the time to send workers over to do work we requested done in October. Linus got out when the roofers came by to give an estimate immediately after I said they were welcome to come in, but the cats couldn’t get out. Linus bolted for freedom the minute the door opened and the guys stood there watching me chase him down and never offered to help. AB was well behaved for the most part, but it’s not realistic to expect her to take endless drives back and forth between the houses day after day when most of her entertainment was packed up. Most of my mom friends work so I had very few options for childcare. It was so hard to do all the packing, keep two houses semi-organized and be a mom. We had to repaint rooms since the landlords suddenly decided they cared about how the house looked. We have so much more stuff than I expected. I thought I had gotten rid of a good amount, but there’s nothing like seeing all your belongings strewn about and piled in boxes to make you consider becoming a minimalist.


On the day of the closing, we did a final walkthrough of the house. The sellers were here which was both nice and very awkward. It was so weird to be in their current home/our future home at the same time. They were so nice and the lady kept talking about how much she loved the house. She kept tearing up and I all but apologized for taking it away from her. She had tears when she gave me the keys and I offered to let her keep one as a keepsake. I told her I understood how she felt because I ADORED our New York home and was offended anyone else was living there. I kept saying we’ll take good care of her house. By the time we got to the office to sign the papers, she was full out crying. It was sweet knowing we were moving into a home that had so many wonderful memories for another family.

We hired a moving company to move the refrigerator and large furniture. The move got off to a slow start because boss Jazzy’s car died. All five men gathered around the hood of the car to diagnose the problem. I moved my car so they could jump it and said I’d leave the keys in the ignition so they could turn the car on or off as needed. One of the guys looked at me like a professor sharing great knowledge and said, “We need your car on to jump his car.” You don’t say. I didn’t go to automotive school but I do know that much. The last thing they put in the moving truck was AB’s playhouse. They were all gathered in one corner so I asked what the problem was, thinking maybe a nail was sticking out. Nope. It was an unidentifiable bug and they didn’t want to go near it. I marched myself over there and swatted the bug off. Once again, a woman saved the day. No little black bug should be holding up production. When we got to the new house after lunch, it was over 100 degrees. I cannot tell you the number of times I apologized to the movers for having to move our stuff in the heat. Did they want a drink? Did they want me to set up a fan? I’m so sorry the sun is so hot. If I could, I’d take the humidity away for all our sakes. I should have stopped apologizing and started remembering that we were paying them good money.


Come to find out, the heat wasn’t all the fault of the sun. The air conditioner had stopped working. It’s a high tech Nest thermostat situation and it kept flashing E73. My brief research said to check the drip pan (didn’t know where that was), restart the HVAC fuse (didn’t know where that was) and check the breaker box (didn’t know where that was). The website said several times that “the thermostats tend to overheat and fail in the summer.” WHY WOULD AN AC DEVICE TEND TO OVERHEAT? They have literally one job and they can’t do it without overheating? I was not happy. Jazzy’s guys helped me find the various breakers and we got it working for a few hours. It stopped again later than night and we called the HVAC man who charged out the wazoo because it was after hours. We couldn’t get it repaired for two more days. Welcome to homeownership!

After nearly two weeks juggling both houses, we did the final walkthrough at the old house. I told Christopher he needed to do it alone so I didn’t say something snarky or unkind to the landlord. She’s a nice person, but a terrible landlord. This town is small enough I knew I might run into her at any point and I don’t want negative words on my conscience. Turns out she goes to the same church as us so now I’m very glad I didn’t go. I saw her daughters on Sunday. The walkthrough was on a Wednesday and painters were going in the next day to paint over the mold on several ceilings so she could show it on Friday. I could have said A LOT about that. I wanted to leave a hidden letter for future owners telling them to run for their lives.


Things are still in a state of upheaval here, but from the very first night, it has felt so much more like home than the old house ever did. There’s a beautiful fenced in yard for Sesame to play in. The neighbors brought us muffins (I was sure they’d see our semi-hoarder status garage and ignore us forever) and we have a fireplace and mantle to decorate. The ac is back on so I think this place will work out just fine. 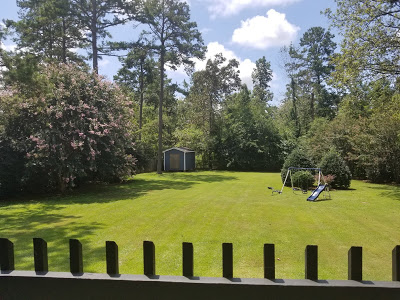