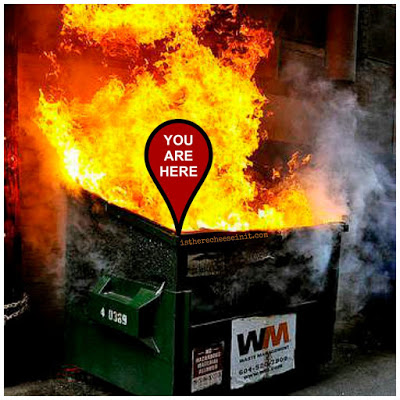 For all the horrible things that happened last week, I present two bright spots- Americans went into space for the first time in nearly a decade and I doubled my previous Tetris score. They are both of equal importance and value to society. As many people want to interview me for my accomplishments as want to interview the astronauts. I’ll happily offer my advanced gaming critical thinking and block organizing skilz to Bob and Doug.

Thursdays aren’t the most exciting day of the week to have a birthday but Christopher and Annabelle made it festive for me. Annabelle drew me this picture with the following note which translates (I’ve been told) to “Happy birthday! Yum yum we’re making strawberry shortcake! Snuggle contest!” 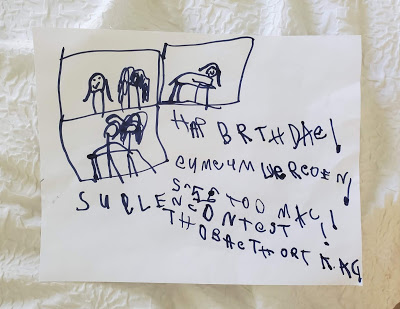 Normally I go to the florist and pick out my own birthday bouquet, but this year I sent Christopher a list of flowers I wanted to be included or left out along with the number to the florist and he got them for me. Linus has since eaten half a rose and several hydrangea flowers. 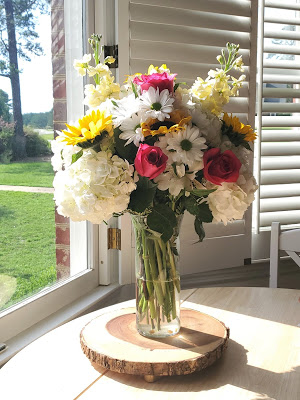 Rumor has it that yesterday was the last Sunday before we can go back to church like normal. “Like normal” is a generous term as we’ll be meeting in cars or chairs in the parking lot like we’re attending a little league game but at least we’ll be with others. If you had asked me when this pandemic started what I thought I’d miss, not going to church wouldn’t have been the top of the list but after 13 weeks away I’ll be so glad to be back. 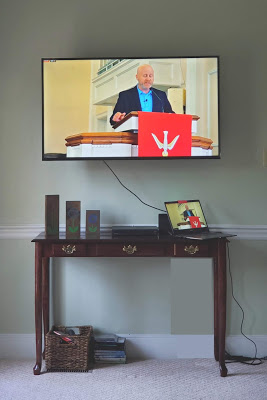 That being said, I’ve kind of enjoyed the Sunday morning routine we got into these last months. Christopher sleeps late while AB and I play. At 11 we gather at Gray Couch Church and watch the service. I usually cross stitch and Annabelle either colors or does sewing. We have logged in late a few times which is pathetic considering we have to travel exactly zero miles to be at church. 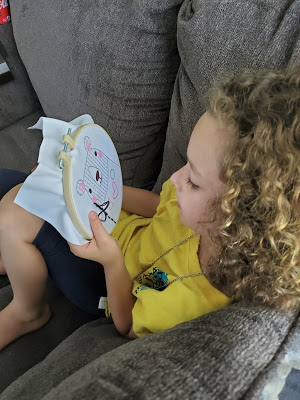 It’s only Monday but this has not been a great week for homeownership. One of the lights and fan in the kitchen went out several weeks ago and we haven’t gotten it fixed. The dishwasher is on its last legs and when I went to unload it, most of the dishes were still dirty so I unloaded it and washed everything by hand. Annabelle washed her hands in the bathroom and says she only touched the light fixture (“I promise I didn’t swing on it!”), but the bathroom light, the remaining kitchen light, washing machine and dryer, as well as the dishwasher all stopped working. I didn’t know the dishwasher had stopped working until I loaded it all with the supper dishes. I had to unload and handwash all the dishes I had just put in. The circuit panel was installed upside down and it’s unclear whether the paper labeling which switches goes with which room is also upside down. The handle on the door to the backyard that we use dozens of times a day fell off in my hand. It wouldn’t open from the inside but would from the outside so it became a oneway door. Christopher got the handle to go back on but it’s hanging on by the metal equivalent of a thread.

The electrician and I played phone tag all day. I called both their numbers this morning and left two messages but heard nothing back. I went to call them an hour ago and saw that earlier I had dialed the area code wrong and called someone in Ontario. Bob and Doug will not be asking me to head up their communications department.