at least we still have memes

I am over this stupid virus.

I really reached a breaking point with it last week. I so desperately want life to be normal again. I don’t want to worry about visiting family because I might get my grandma sick. I hate going to the store with people who stand a mile away at check out like they think one of the other customers is about to explode. I remember back in March, at the very beginning of quarantine, saying to Christopher that if “they” could promise this would all be over by July 1st I’d stay home and do whatever they asked so life could get back to normal. July seemed so far off and I needed to hold onto the hope that it would be over by then. Young, naive Sarah. When all the protests started, I kept thinking, “If only we could go back to only having the virus to worry about.”


I haven’t had a wedding or graduation canceled, but it hasn’t been a walk in the park either. The beginning of the virus coincided with the beginning of my ectopic pregnancy. I spent weeks going to the doctor every few days for ultrasounds and blood tests. I’d slink out of the house praying that the neighbors weren’t watching and judging for me leaving again. At the time, our town had the third-highest number of cases per capita in the world but I had to go to the hospital for a shot in the midst of it all. The nurse didn’t know where to put me so I sat next to the nurses’ station while the vice president of the hospital and several high ups stood three feet away from me and planned how to turn that wing of the hospital into the new covid-specific emergency room. Two hours later, they started bringing positive cases in, walking them right by me. 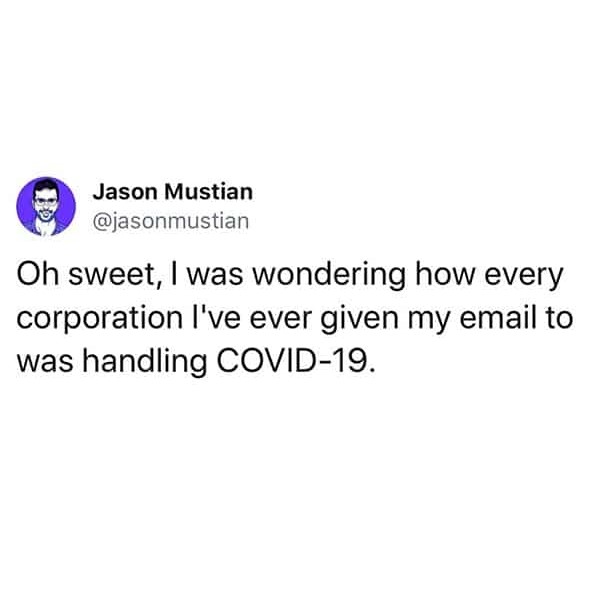 Annabelle’s emotions have been up and down. Some days she’s fine but everything in her little world is topsy turvy. She’s desperate to see friends. Every time she asks to play with a new friend it’s a dance of “Are you ok getting together? I am but if you’re not, that’s fine! We can see you in 14 weeks if things have improved!” By now we know who is and who isn’t fine with visits so at least we have that. We can’t go to splash pads or library activities. She put a tiny paper mask on her doll and it made me tear up. I don’t want her growing up in this new world.

I want to go to the store without worrying. Our TJMaxx was open for several weeks before I went in. I didn’t want a visit to my favorite store to be ruined by masks and directional stickers on the floor. Some of the arrows were pointing in opposite directions in one-way aisles so it was impossible to follow. We went to Bath & Body Works but we had to call first to see if they were open because we can’t assume these days. They were, but only allowed 13 people in at a time. Trying to keep us separated seemed pointless when we were all standing next to each other to pick up and smell candles and lotions. The cashier told me to put the items on the counter so she wouldn’t have to touch them, but she touched them anyway when she put them in the bag. At Publix, their new thing is to make the customers stand so far away from the card reader that it can’t physically be reached. Once the bagger is done bagging the customer is ”allowed” to move forward and pay. Meanwhile over in produce, Elmer is chatting with everyone while he restocks peaches and peppers a foot away from shoppers. Kevin is restocking crackers right next to customers. I know everyone is doing the best they can and none of us have gone through this before, but I don’t understand some decisions.

Don’t get me started on having to make educational choices for this year. 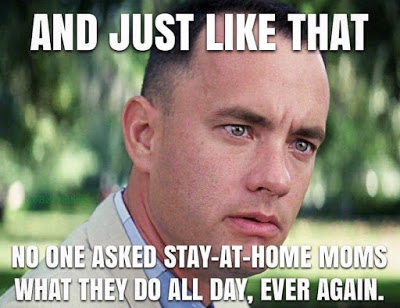 On the very tiny bright side, there’s a small part of me that likes that literally everyone in the world is being affected by the same thing. I used to say delivering a baby was the great equalizer and I’m going to add global pandemics to the list. We used to talk about the weather when there was nothing else to say. Now we talk about what has become the new hot commodity at the grocery store. It’s fascinating to read articles and watch videos by people going through the same thing in other countries. High School Musical was ahead of the times when they sang, “We’re all in this together” back in 2006. 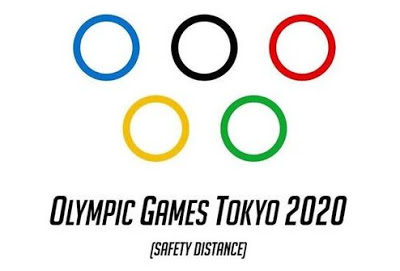 I know we’re very fortunate and that millions of people have it much worse, but it’s still hard. It’s like we’re living in a snowglobe that’s been shaken, thrown against the wall, shattered into a hundred pieces then stomped on by a bull. But let me tell you how I really feel! I’m so thankful that Annabelle doesn’t know the full extent of what’s happening. Last night at bedtime she prayed, “Thank you that everything is going so well.” I’m glad she feels that way!