I’ll sue when they say potato chips are restricted

I had a very unusual situation at Walmart last week. As usual, they only had two cashiers and half the self-checkout machines were broken. I started scanning away and the broccoli wouldn’t scan. I put it aside and finished scanning the rest of the items. I went back to the broccoli and it still wouldn’t scan. I tried three methods and finally had to push the help button. By now there were several people in line behind me so I became That Person holding things up. Shanaynay shuffled over in her yellow vest, pushed a couple buttons then grabbed (and I do mean grabbed) my broccoli and said, “You can’t buy that. It’s restricted.” Pardon me? Restricted broccoli? I wasn’t buying an illicit drug. I’m trying to be healthy. Shanaynay would provide no follow up information despite my questions. She didn’t know why it was restricted and she wasn’t about to lead me to someone who could give me an answer. She took my broccoli and shuffled away. I knew I should have bought french fries instead of broccoli. I did some research and found a list of items that cannot be bought from the Walmart Marketplace but that doesn’t apply as I was not shopping at the marketplace. But I did learn that if I have the desire to, I am prohibited from buying “Alaskan Native items with anything from a bear” so that really narrows down my shopping list. 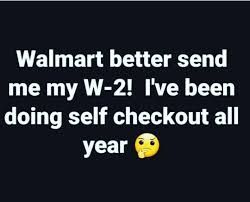 Sunday was the Super Bowl which I didn’t know until Sunday. Had I known, I would have taken advantage of sales on snacks. I truly could not care less about football if I tried. If it was removed from the rotation of sports of the world I wouldn’t cry. Grandma LOVES the Patriots so I have to seem interested for her sake. My favorite football story is from nearly 15 years ago. I say ”favorite story” like I have a plethora of football stories from which to choose. I have exactly one. Grandpa was literally on his deathbed and we were all sitting around the room chatting. The Patriots came up and Grandma made the off-hand comment that she thought their coach was handsome and she would consider marrying him if he asked. Grandpa’s very weak voice piped up from the bed, “Rita. I’m right here. I’m not dead yet.” It makes me laugh every time.

I really need to leave for the grocery store before I get AB from school, but I want to finish reading what is restricted on the Walmart marketplace first.  Products made from the hide of a donkey, tasers, and golf ball launchers are all on the no-fly list so here’s hoping Publix has them.