I was recently listening to one of my favorite podcasts and they were discussing their quirks and pet peeves. Elizabeth and I had a long talk about it and decided it’s much harder to pin down our quirks than our peeves. Our quirks are how we are naturally so it’s hard to say if they’re unique or not.

Quirks-
* I never throw away a butter wrapper without folding it first. I always fold it in half and sometimes, if I’m feeling wild, in half again.

* I cannot stay in pajamas all day. If I’m sick, I will get out of pajamas, into other comfy clothes, then back into pajamas at bedtime.

* Along those lines, I have to make the bed every single day. The day might go to hell in a handbasket but I will have a made bed! When you combine the pajama thing with the bed thing, it becomes quite the process if I’m sick. Get out of bed. Put on new comfy clothes. Make bed. Either lay down on the couch or lay on top of the made bed and cover up with another blanket. I can’t help it. It’s the way I am!

* I feel very bad for stuffed animals and dolls when they’re jammed into bins or stuck between the bed and the wall upside down. I’ve spent so much of my life twisting dolls’ hands and feet around so they’re facing the right out. Don’t get me started on how I feel about unused toys. It’s exhausting feeling compassion for every little thing.

* I love untangling things. It doesn’t matter if it’s jewelry, cords, yarn, you name it. For some reason, it’s calming to me.

* I will always clean up the table at a restaurant before we leave. I’ll stack the plates and put all the trash in one pile. I’ve done it for so many years now that Christopher has stopped telling me someone else is literally getting paid to clean it up.

* I keep all the cash in my wallet grouped in bill amount then put into alphabetical order by the Federal Reserve Seal. This makes it sound like I have much more cash than I actually do.

* I am very excited about someday becoming a grandma. I will be one of those old ladies with embroidered sweaters, big matching earrings, and my glasses hanging on a beaded chain. I’ve narrowed down my grandma name to two possibilities. I’m trying to make Christopher agree to cute matching grandparent names but he is not on board.

* I have at least two hair elastics on my wrist at all times. I like to be prepared in case my backup to the backup breaks. I’ve taught this to Annabelle and between the two of us we could do six ponytails. It’s a legacy I’m proud to have passed on. 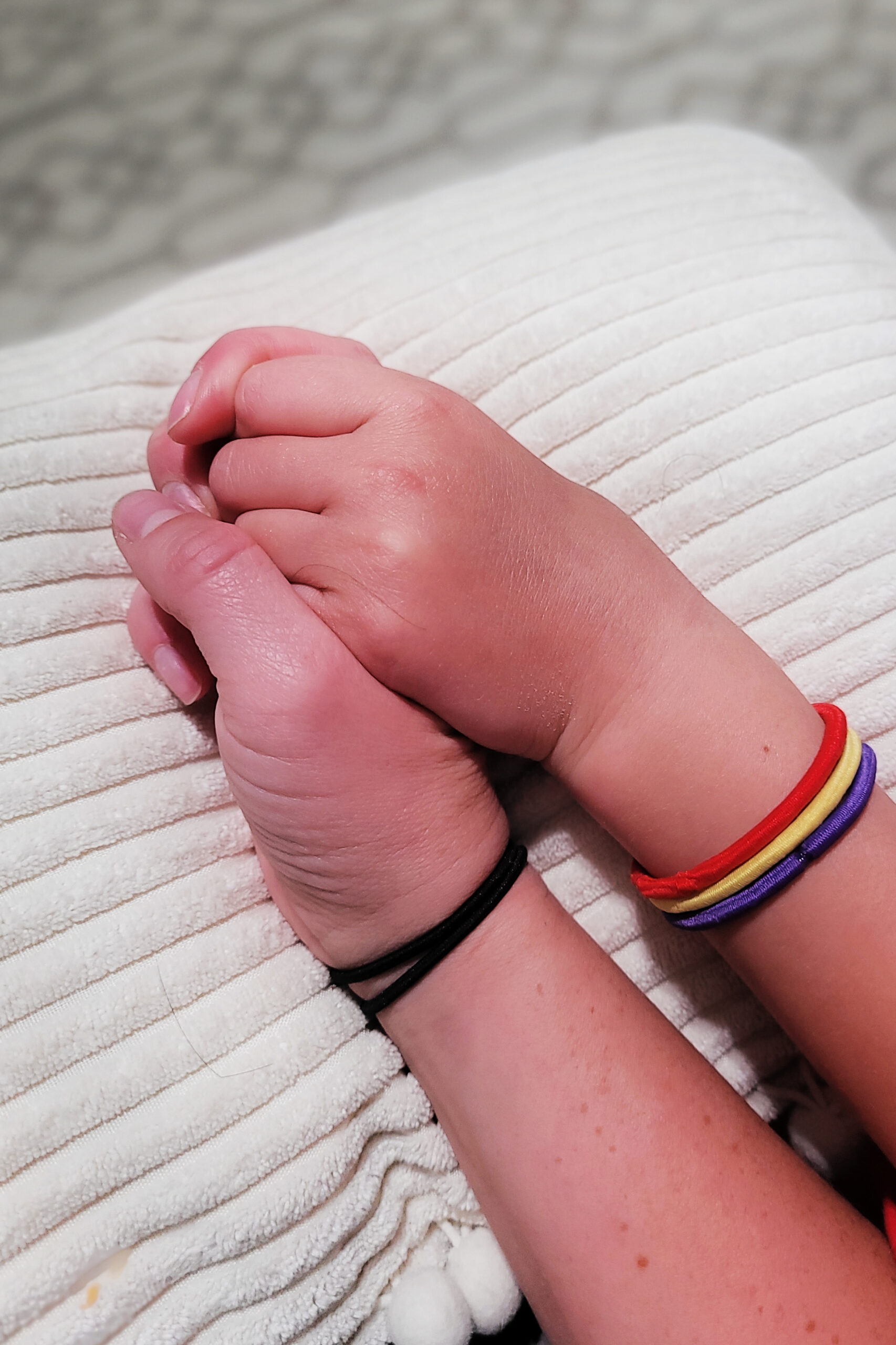 Peeves-
* Toothpaste all over the bathroom. If it’s not in the tube, the only place toothpaste should be is on the toothbrush. It should never come into contact with the mirror or floor.

* Ticking clocks. If I can hear a clock or a watch ticking, I will hunt it down and put a pillow over it. I’ve passed this on to Annabelle, along with my anxiety issues so she’s a very lucky girl.

* Children not being treated as people. It drives me nuts when someone asks me a question about AB when she’s standing right next to me. She knows how old she is, what grade she’s in and what school she goes to. Ask her, not me. It doesn’t happen as much now as when she was younger, but we’ve often gone out as a family and only been given two sets of silverware. She’s a person who needs a fork too!

* Certain government organizations telling us we’re “allowed” to travel. I’ve been allowed to travel this whole time. Don’t tell me I “may now move freely outside.”

* Several stores here have signs up saying ”masks are required by state law” in their building. Never once in this whole thing has there been a state-wide mask law in this state. Some cities had/have mask mandates within their city limits and many government properties can enforce it by law, but I’m talking about the state as a whole. I will respect stores asking me to wear a mask. I understand it’s part of shopping now and while I don’t like it, I’ll do it. But don’t put up a giant sign saying it’s required by law when that’s simply not true. Lying to get me to submit out of fear that I’m breaking the law if I do not comply is not the way to get me to do anything with, to use a phrase I frequently say to AB, a happy heart.

* Speaking of not having a happy heart, one of the things I like least about myself is the small stubborn streak I get when someone who knows less than I do in a situation tries to tell me how to do it. For example, I have been doing the same carline routine for months now. I fully understand how the process works. 99% of the time the same four ladies are out opening the car doors, but last week a new lady was out. She’s never done carline before but she stood there directing traffic like she’s always been the boss of the operation. I’d be lying if I said I didn’t drive slower than necessary because I was very annoyed. A new lifeguard at the Y made up a new rule about kickboards. I was not having it. I told Annabelle she could keep doing what she was doing. (I said it quietly because I didn’t want Sharon to think I was being rude.) Then I went straight to the aquatics director and asked her to straighten Sharon out. I think my exact words were, “I’m really sorry to bother you and I don’t want to be THAT mom, but Sharon is saying such and such about the kickboards and that is completely against what we’ve been doing for three years. I am so sorry. I see you’re working so I can leave.” It was a very calm and unaggressive request to straighten her out because I’m not a monster. I can still feel my blood pressure rising every time I look at newbie Sharon. I realize that was a VERY LITTLE thing to get flustered about and I’m not proud of it, but I have a hard time being told what to do when I already know what to do.