Last February AB and I flew to Denver to visit Katie and her family. Things went spectacularly wrong and we spent the first several days of the visit quarantined thanks to Kezia having the flu. Little did we know that quarantine period was just a small taste of the real quarantine that was to come a mere three weeks later. Katie and her children arrived at our house for a visit last Tuesday evening. Katie and I were so excited be reunited after sixteen months apart. We would redeem the visit that had been stolen from us! This would be the visit where everything went well!

Our girls are a few days shy of one month apart in age but their personalities are very different which leads to some bumpy playtime. Their mothers are in their 32nd year of best friendship so the girls have no choice but to follow in our footsteps. We will make them best friends, gosh darn it! (When Katie and I were pregnant at the same time, she said, “Sarah, if we have opposite genders we can’t push them to marry each other so we have the same grandchildren.” It’s almost as if she knew that was EXACTLY what I was planning on.) Katie and I talked before they arrived about the girls having some designated apart time each afternoon. Kezia and Annabelle had been playing for a grand total of 10 minutes before AB got overwhelmed and ran up to me saying, “Kezia doesn’t understand part time! I need part time and she doesn’t want it!” They literally hadn’t set foot in our house and AB was asking for alone time. It did not bode well for the rest of our visit. An hour later, they were having a ball and had come up with a system where Annabelle would put a piece of paper under her door in the morning when she was ready to play. It wasn’t all fun and games from there on out, but AB didn’t ask for ”part time” every hour.

We took them for a walk around the pond where Sesame and Finn both stepped in fire ants. Finn was tired, hot, could barely walk, and had to be carried around the pond. I offered to carry him since a) Katie is recovering from a broken elbow and b) I’m doing my best to become his favorite Auntie Sarah. He has another Auntie Sarah who I love but I need to hold The Spot of Honor in his heart. 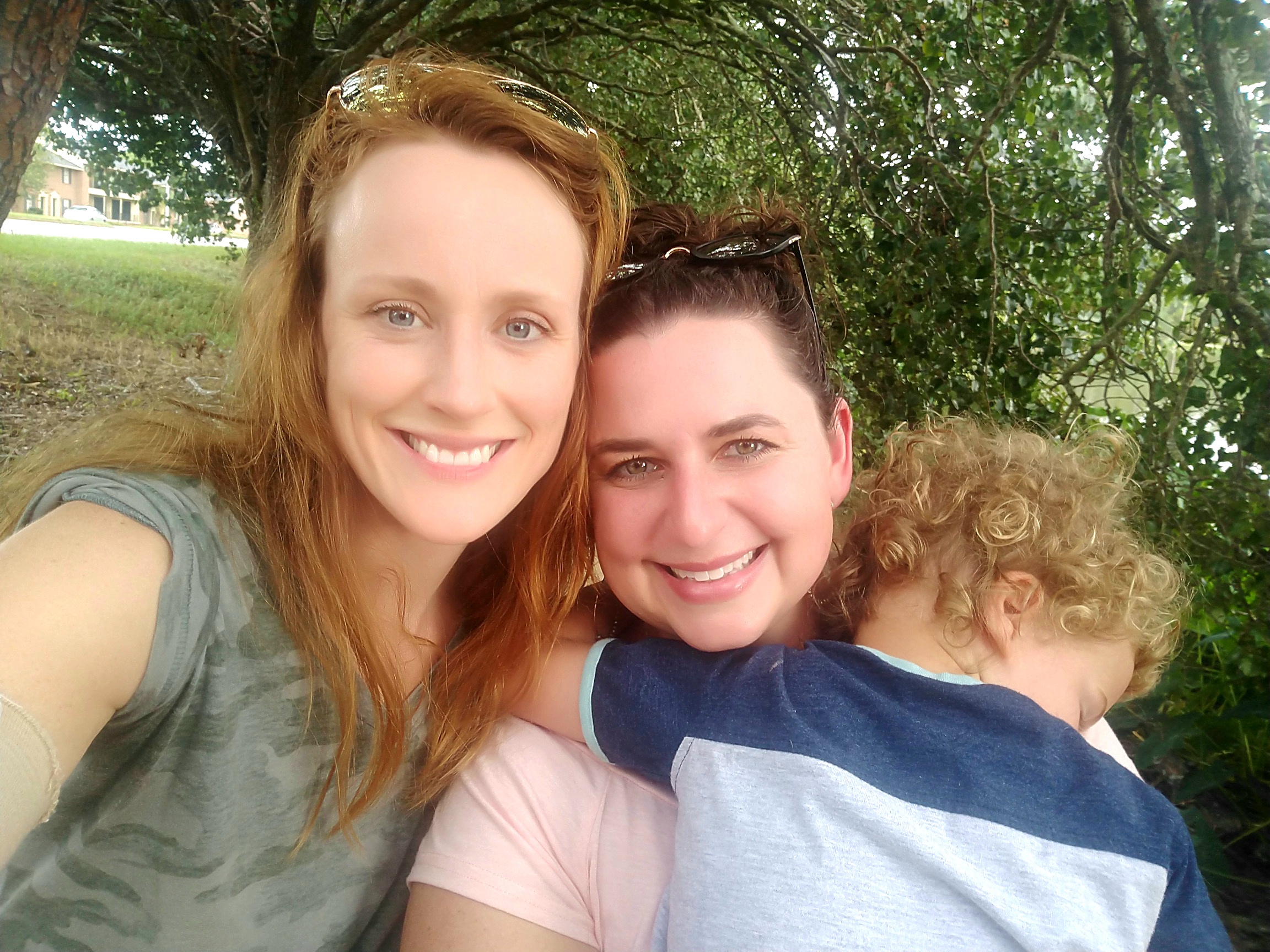 When discussing The Lion, The Witch and The Wardrobe.
Annabelle: “It’s called The Criticals of Narnia.”
Kezia: “No. It’s The Chronicles of Shamarnia.” 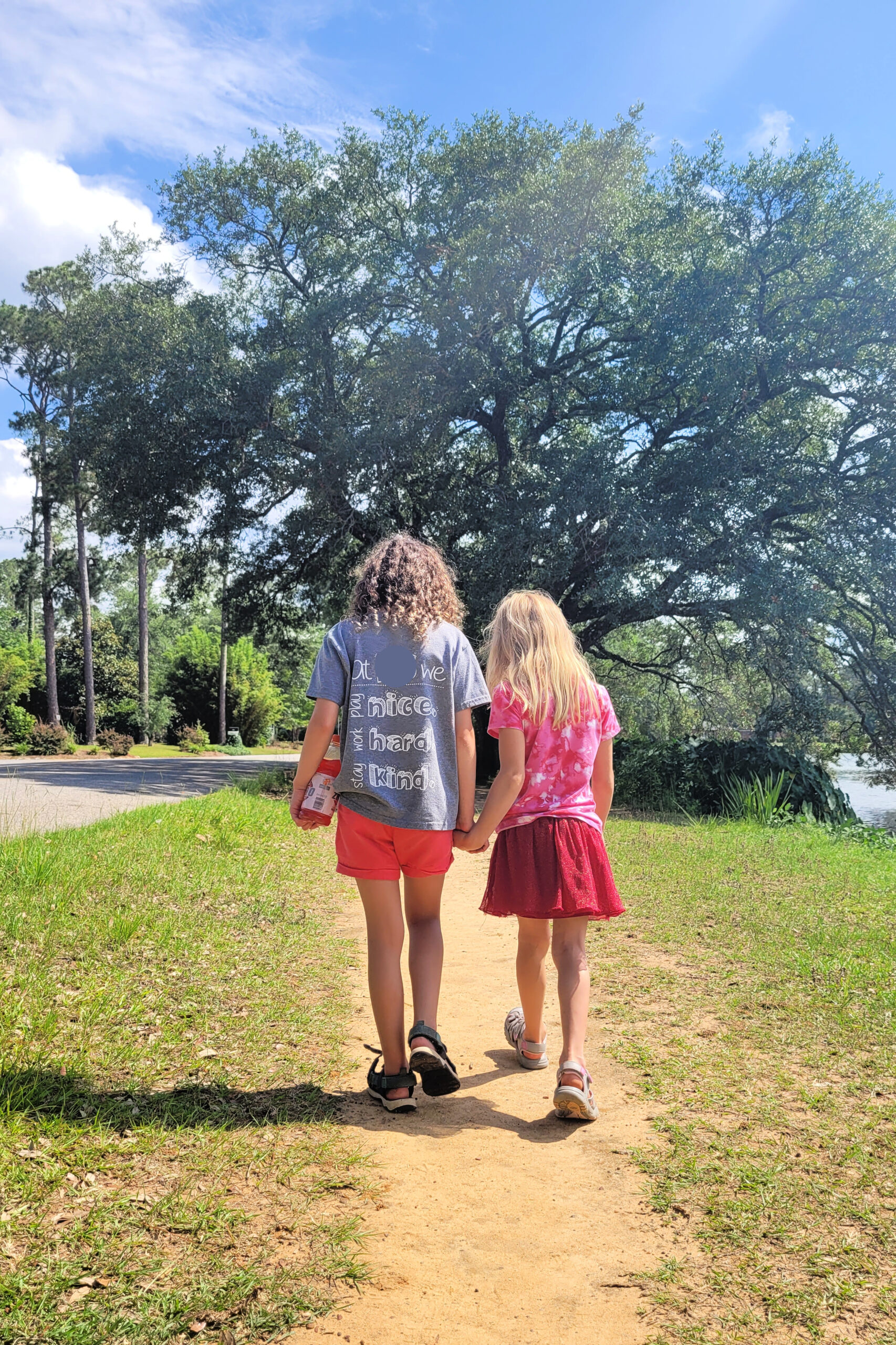 We sent the girls to the neighborhood camp for two mornings. They walked across the street like teenagers and it made my heart hurt a little. While they were there, Katie, Finn and I went to the coffee shop, toured a new gym, and went to Kohl’s so she could help me find new sunglasses. I thought I’d branch out and get a new style but no, I ended up with my old faithful style which are so big they need their own zip code.

This is the point of our story where things start to go downhill.

You recall that Finn got bite by fire ants and was tired. He was also irritable, not eating much and had a low fever. I sent a picture of the bites/spots on his feet to Neighbor Doctor Sarah who instantly diagnosed him with hand, foot and mouth. UNWANTED PLOT TWIST. He was covered in spots and sores. He cried all night long and looked like a sad little puppy all day. We did what we could to relieve the pain but there wasn’t much we could do besides wait it out. We wanted to cover some of his worst spots but he cried every time we tried to put ointment on. Preschool worker/hospital volunteer Sarah came out with a flourish. “Do you want a Mickey Mouse bandaid? It’s so fun! I wish I had one! It’s Minnie Mouse! So fun! Do you believe it?! What about a Spiderman bandaid?! That is so cool!” He was tickled and asked for new bandaids every day. I am a great bandaid hypeman. We told the girls not to touch him or share his cups. They were not to be within breathing distance of him. He was to sit on his cushion on the couch and play with the toys on his sheet on the floor. At this point, we had all been together for a number of days so our efforts may have been in vain, but we had to try.

Be not deceived by this sweet face. This picture was taken on one of the worst days while I watched Finn have an Epsom salt bath and Katie dealt with an issue in another room. I told her to never doubt the love I have for her children. I gladly undressed and bathed her son who looked like he had leprosy. I will do whatever necessary to be his favorite Auntie Sarah! 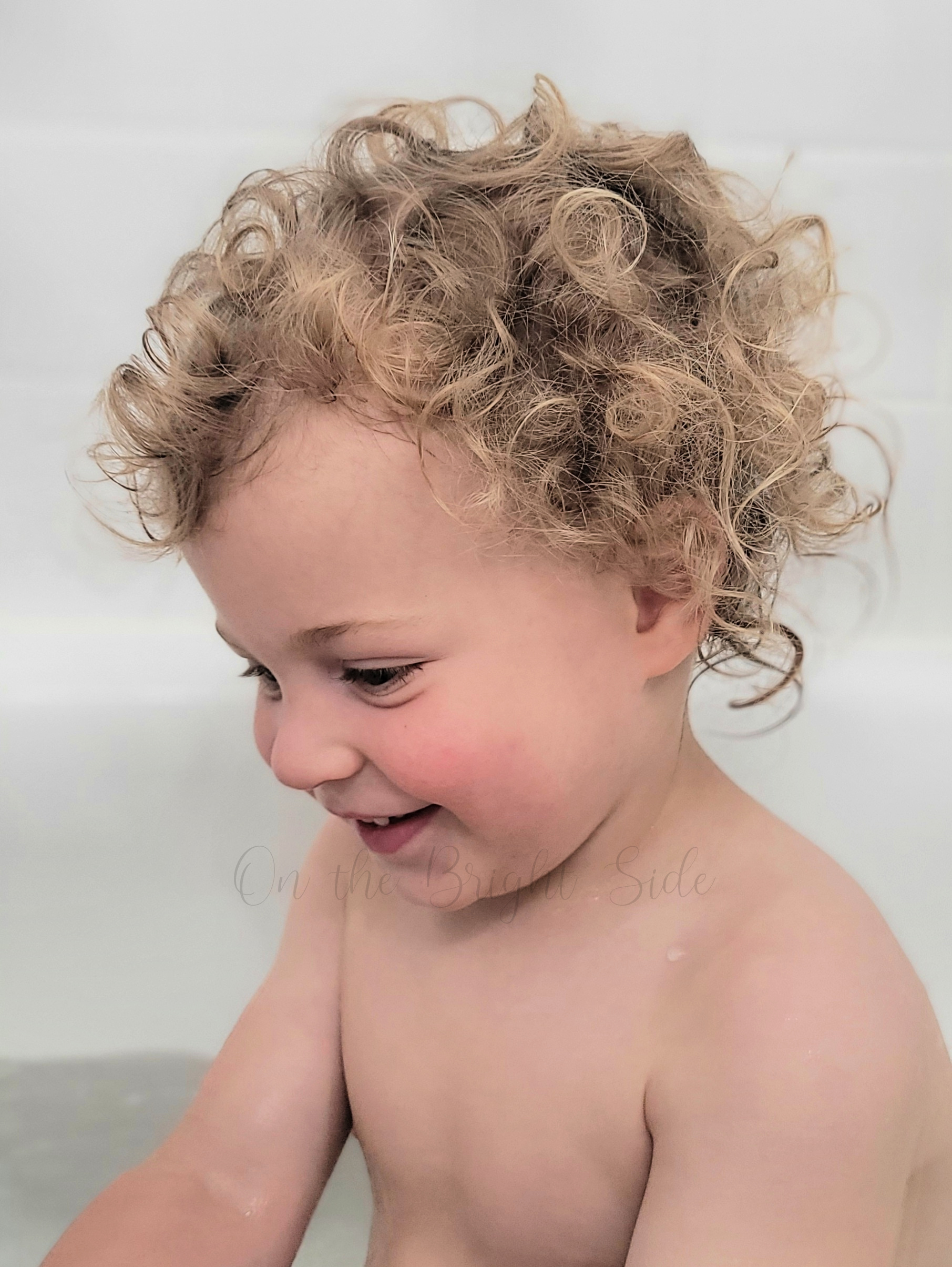 On Saturday Katie and I left Christopher in charge of the one sick and two healthy children for a few hours. We needed some wild time out on the town. Things can get pretty wild in the athleisure wear section of TJMaxx. We got coffee then went to get our nails done. They took our temperature at the door of the nail salon and I was fine. It flashed red alert on Katie. It was barely 100* and I knew she wasn’t sick but they made her sit in the waiting area. I knew without a doubt she did not have the ‘rona. It was a hot day and we had been sitting in the sun in the drive-through line. One nail lady was saying not to worry about it but the owner was saying it had to go down more. I understand that they need to take precautions, but I was also annoyed because we had so little time to do something fun together and we were being told Katie might not be allowed to participate. We didn’t wait more than a year to see each other only to be hit with more sickness and have a false temperature stand in our way of a little self-care time. A few minutes later it went down enough and she was allowed to get her nails done, but my blood pressure was still high.

We did our best for the next two days before HFM took down its next two victims- Katie and Kezi. We came up with new plans of keeping the rest of us from getting sick. We had a two-step process for washing hands and designated eating areas for the sick and healthy. We made a bigger area on the couch for the sick ones. By now Neighbor Doctor Sarah had told us that HFM spreads through the virus that causes the spots not the spots themselves which helped when it came to skin to skin contact, but we still had to be careful. Children are no respecters of space and/or airborne germs. The girls were not happy they couldn’t play together beyond bikes or other parallel play. We spent all day spraying Lysol and disinfecting and washing so many cups to make sure no one used anyone else’s by accident. It took us several nights to get through one movie because someone was always crying and needing motherly love and attention. Eventually, we got into a pattern of giving them all melatonin so they’d sleep and we could have some us time.

Obviously, it wasn’t the ideal trip and we need a redo asap, but I’m so glad they came. No one makes me laugh like Katie. No one somehow instinctively knows that I’m out of rice flour and will bring me a bag of rice flour her sister didn’t need. She convinced me to join a women’s gym and helped me find new workout clothes. She handled both her children being sick while being sick herself AND having a broken elbow with much more patience than I could have. If I have to be in close quarters with a bunch of sick people, I want it to be with her. Her and Lysol, the newest BFF in our group. 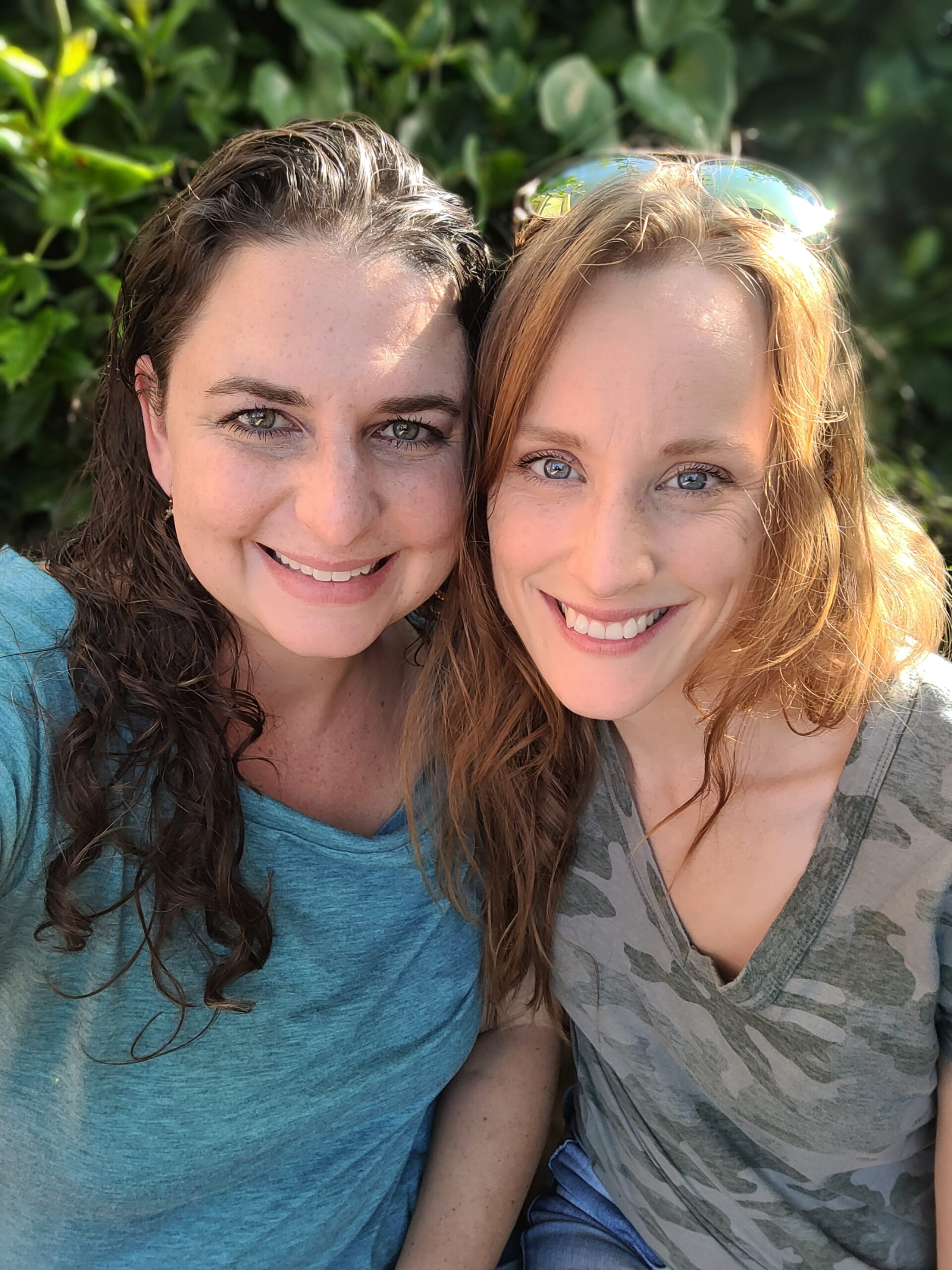