I know we’re two days from New Years but I have a personal tradition of recapping December events lo, many days after which they happen so why stop that tradition now.

Welcome to the peaceful oasis that was my backyard a few weeks ago. 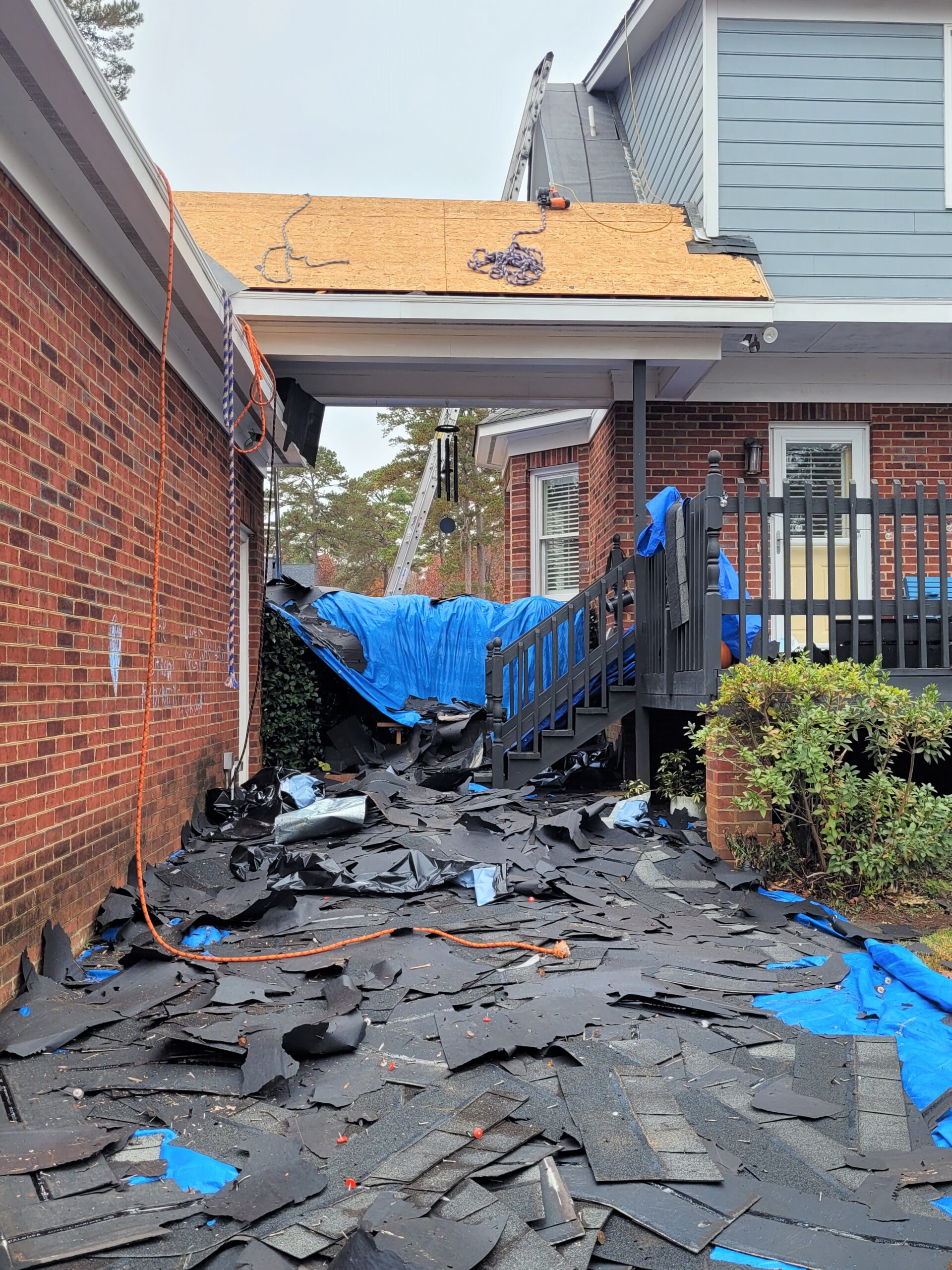 Can I offer you a cocktail on my deck? 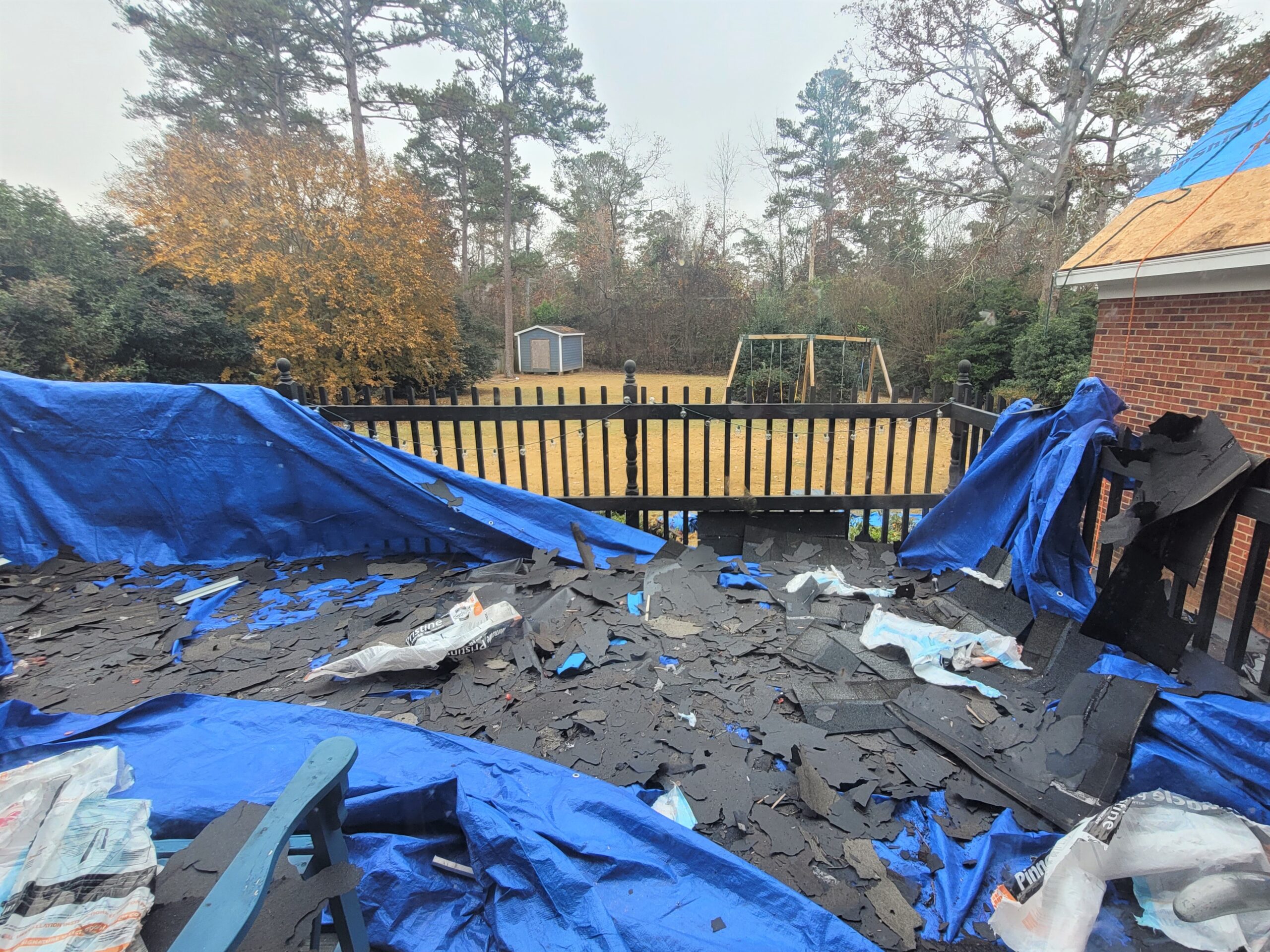 Our new roof was being installed (? put on? put up?) and it wreaked havoc on my yard, my deck, and my cat’s nerves. Linus, who has never been described as a chill cat, had never been so high-strung in his entire life. He was squeezing himself into the smallest spots under bookshelves and beds. He got so scared he threw up. I wanted to slip valium in his cat food. Lucille was not bothered by the noise or her brother’s anxiety. The pictures falling off the walls from the constant banging don’t rock her boat at all. 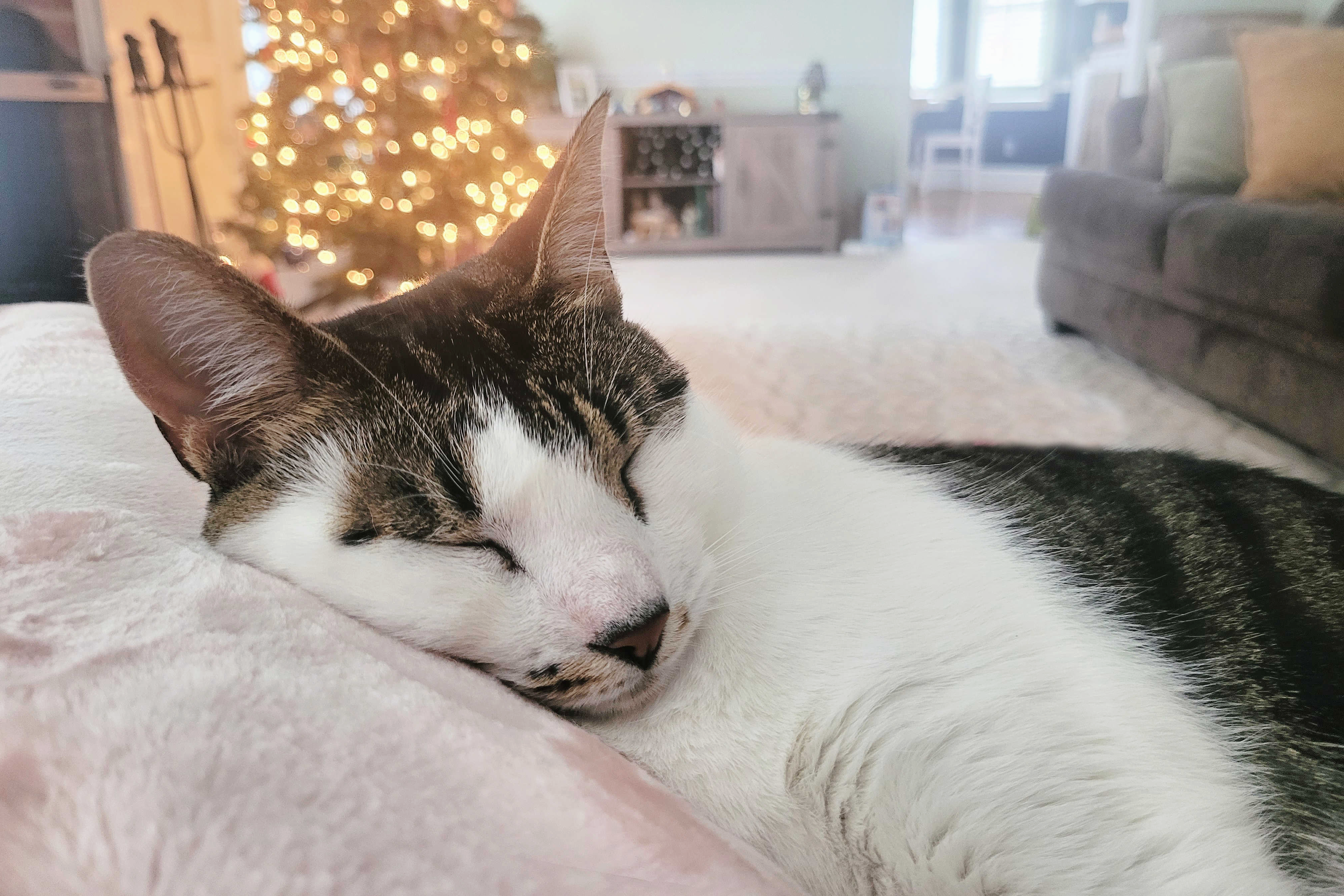 It was at this most HGTV perfect home time that Joanna came to visit. Without fail, she’s been the most consistent friend when it comes to visiting us. She has seen all but two of our eight homes. I like to think I’m a generally good time but a different version of me comes out when I go home or my friends from home come to visit. We call it Massachusetts Sarah. Massachusetts Sarah does things like get a running start on one side of the kitchen in order to slide across the counter like a penguin. I try to be a low-level party bus at all times, but I am more reserved when I’m in mom/wife mode. Joanna came to town and immediately out came a lower energy/post-surgery, Massachusetts Sarah. We laughed until we cried. I’ve known Joanna from the day she was born so she’s only ever known me that way. To be honest, there were several years was a very brief period when I deemed her too young to play with because I am two years her senior, but I came to my senses. I did look on her fondly when she was a baby baby. Look how happy two-year-old Sarah was to be holding little Joanna. I was thrilled! She was less than happy about the arrangement. She insists she was unhappy about the bonnet but I’m sure it was how hard I was squeezing. 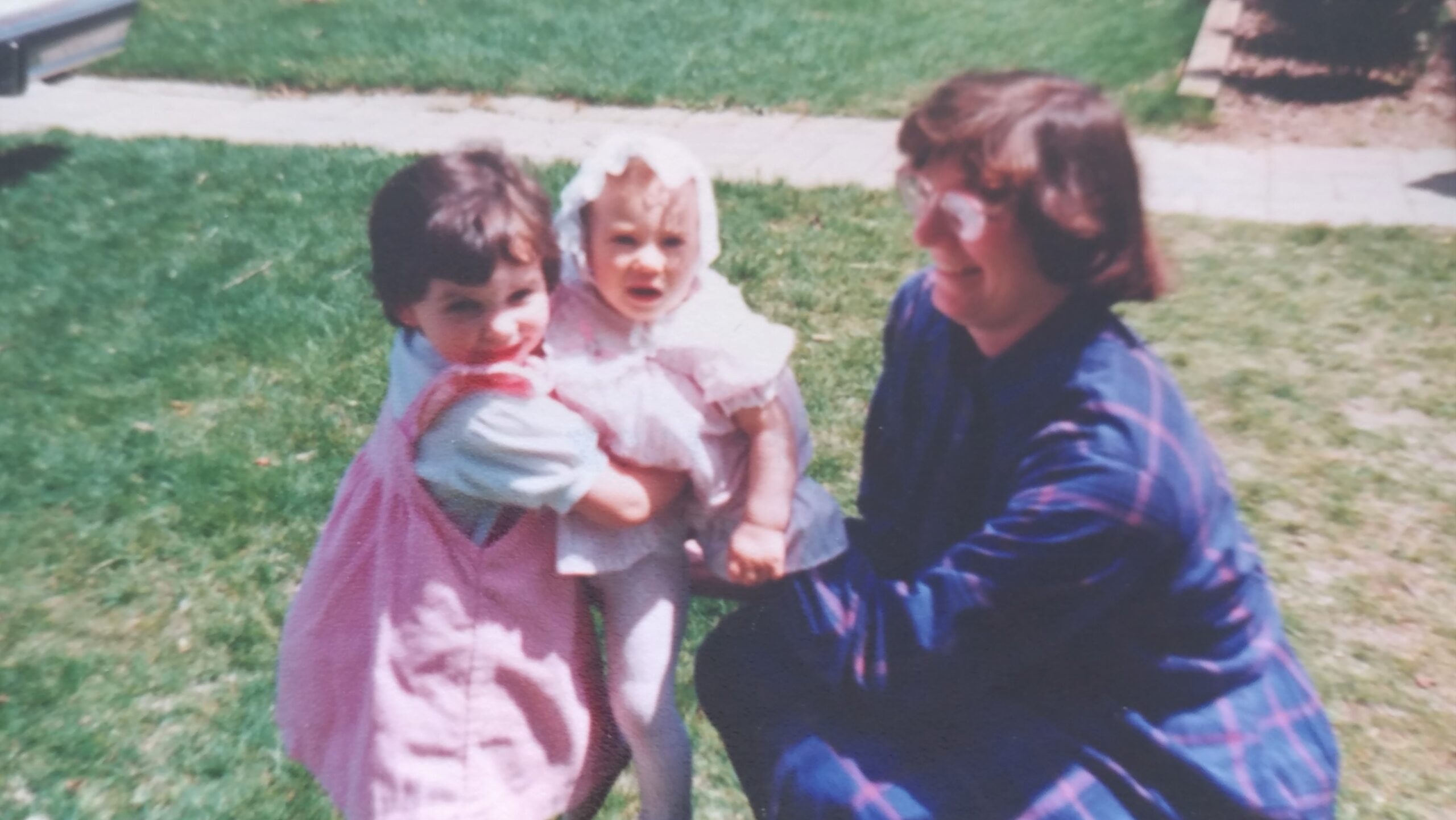 There isn’t much to do in our bustling metropolis which is how we ended up at Walmart within 12 hours of her arrival. I took her to the coffee shop and the one non-chain restaurant that’s clean and that about wrapped up our tour of the town. She helped me address Christmas cards and pack for Aaron’s wedding. I like to give my guests a good time when they come to visit, but I’m still recovering from the surgery and my overwhelmed level is about 12/10. She showed up willing to help and I reluctantly accepted.

Sesame had many events that all fell on the weekend Joanna was here. She had her first basketball game and I mean this in all love, but sports are not her thing. She has great sportsmanship and is very good at complimenting her teammates, but is not good at the sports part of sports. She doesn’t like loud noises so playing in an echoing gym with people yelling and shouting isn’t up her alley. She also doesn’t understand how to play the game of basketball which I knew going into the game but I don’t think she realized until she got there. But she gave it her best effort. When she played Tball with the Y in the summer, the coaches often showed up 15 minutes before the end of practice. Things are very different in this league. There’s a man assigned to keeping score and “halftime entertainment” when the little cheerleaders in big bows come out. I’m surprised there isn’t a concession stand and someone selling foam hands. 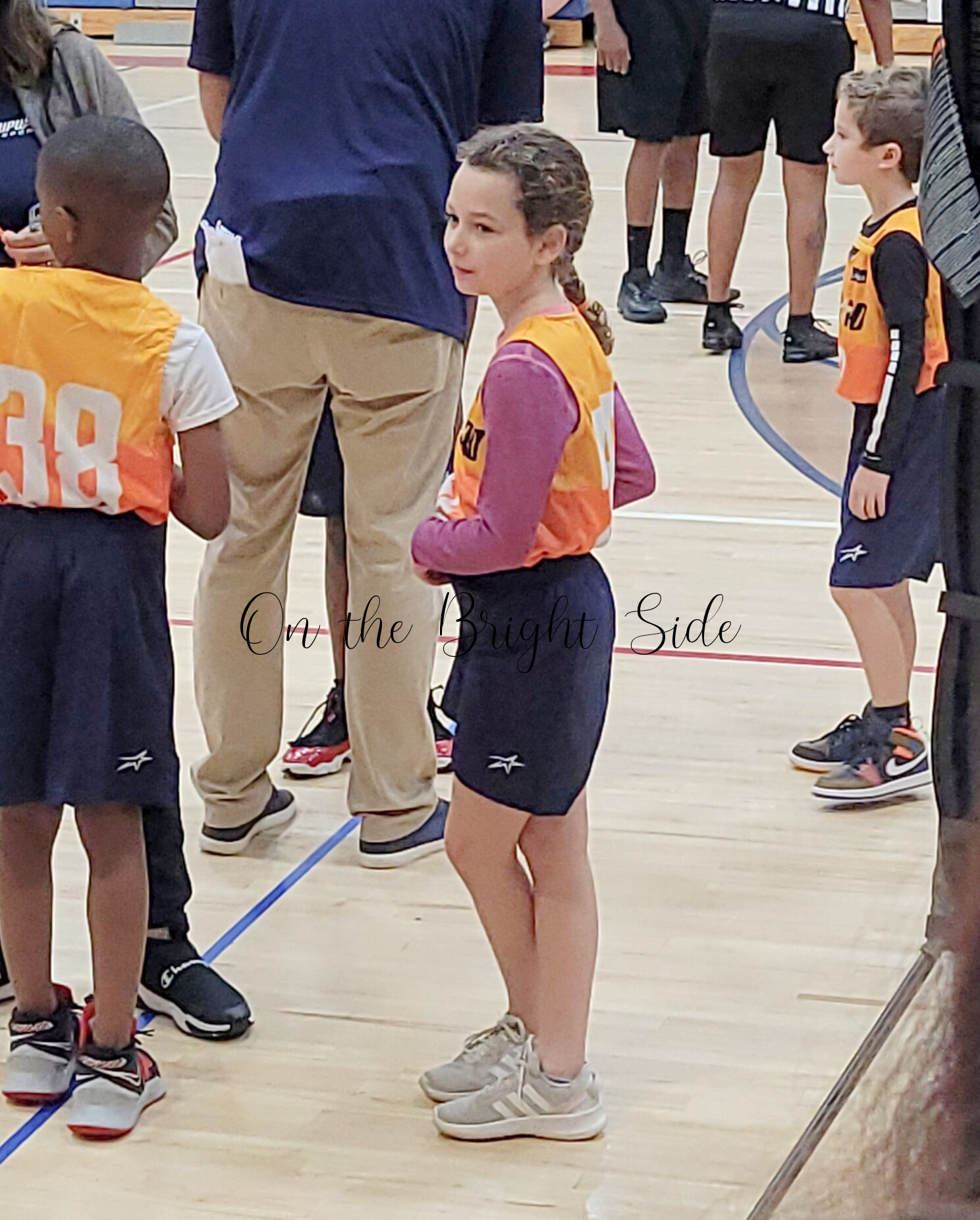 The next event of the day was a school concert held at the local mall. Nothing like singing of our Saviors birth between Auntie Anne’s and Star Jewelers. 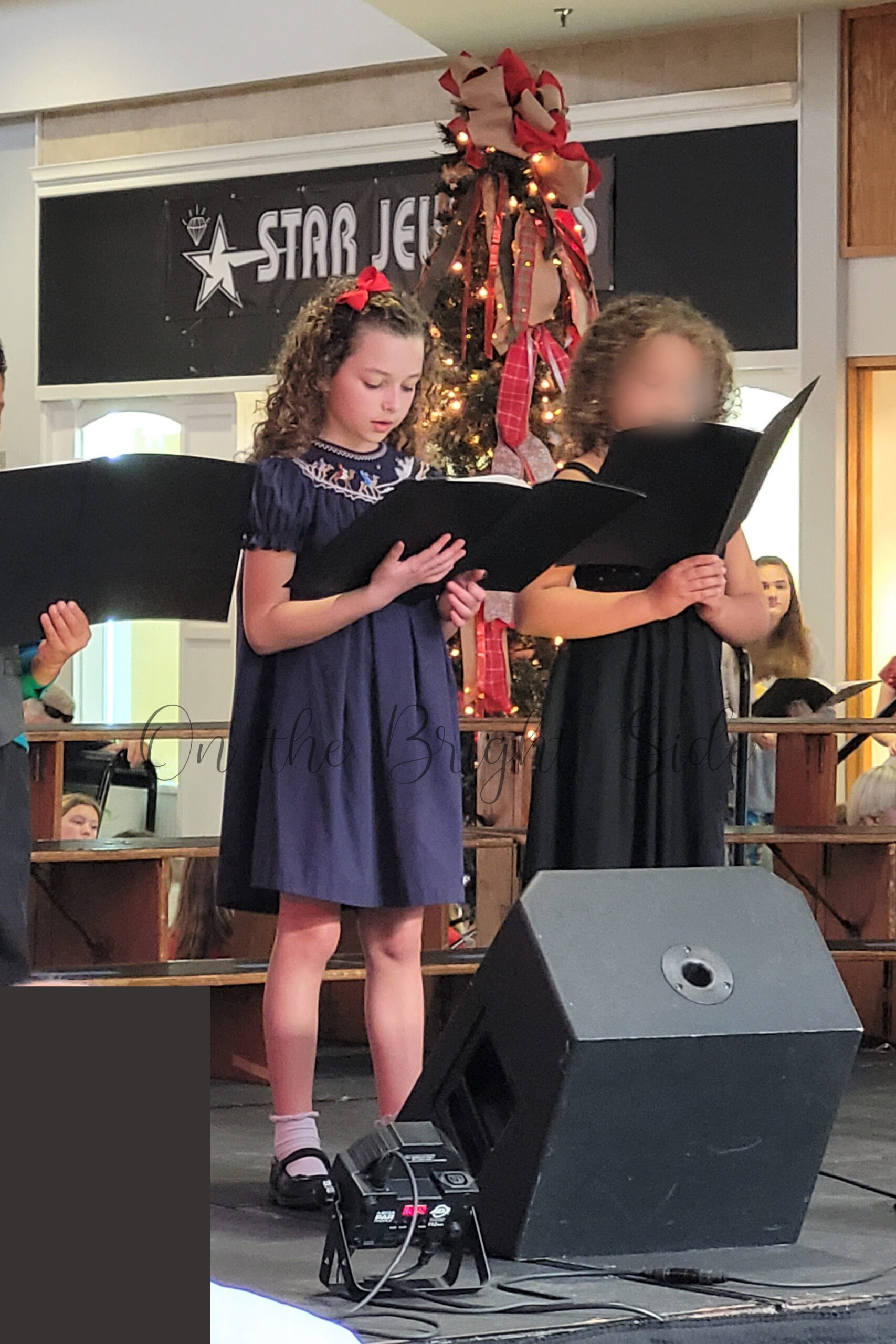 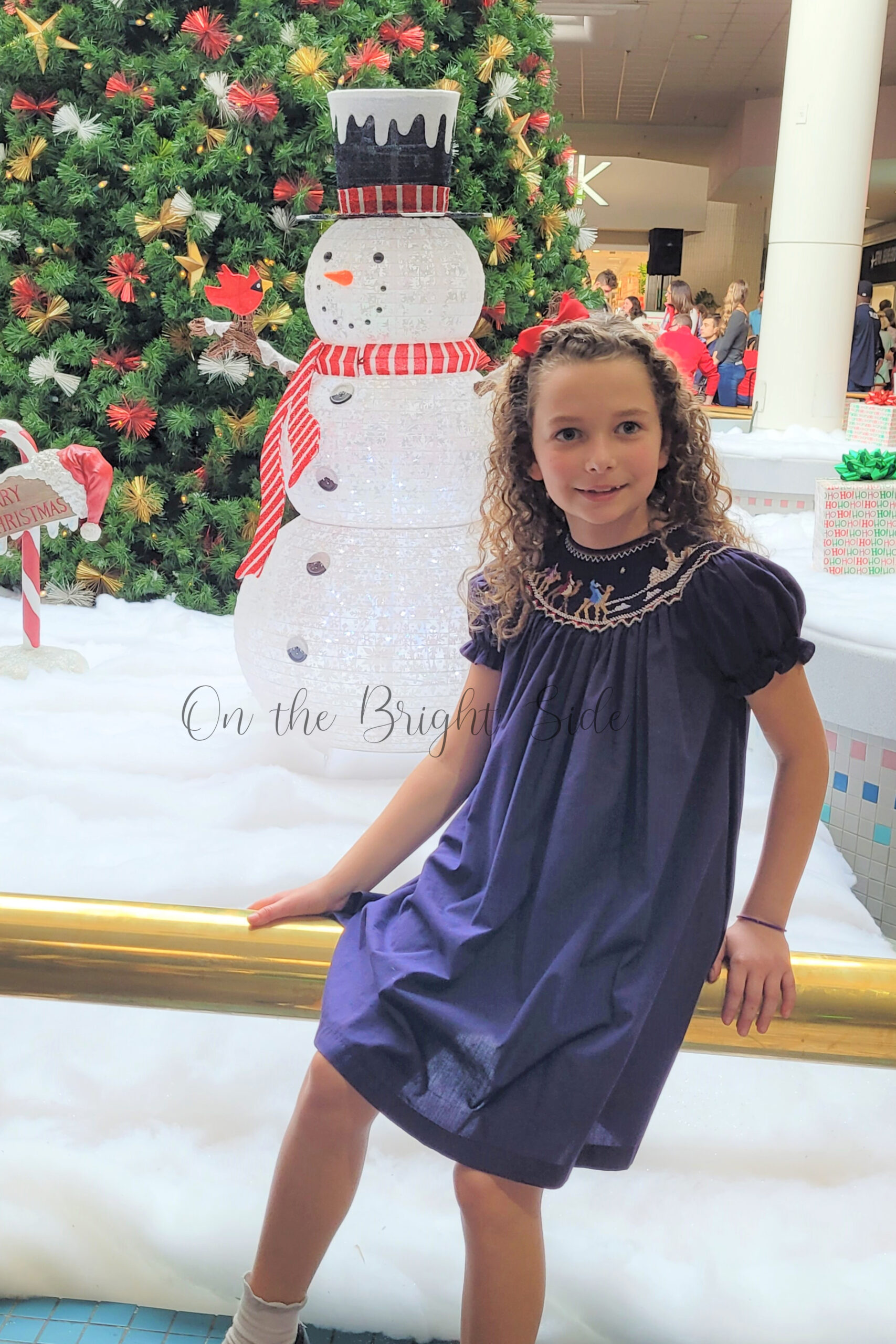 Look at the way she’s staring at Christopher. All that love and adoration towards the person who takes her out for pancakes every Saturday and not one bit for the woman who literally fought tooth and nail, blood, sweat and tears to bring her into this world. 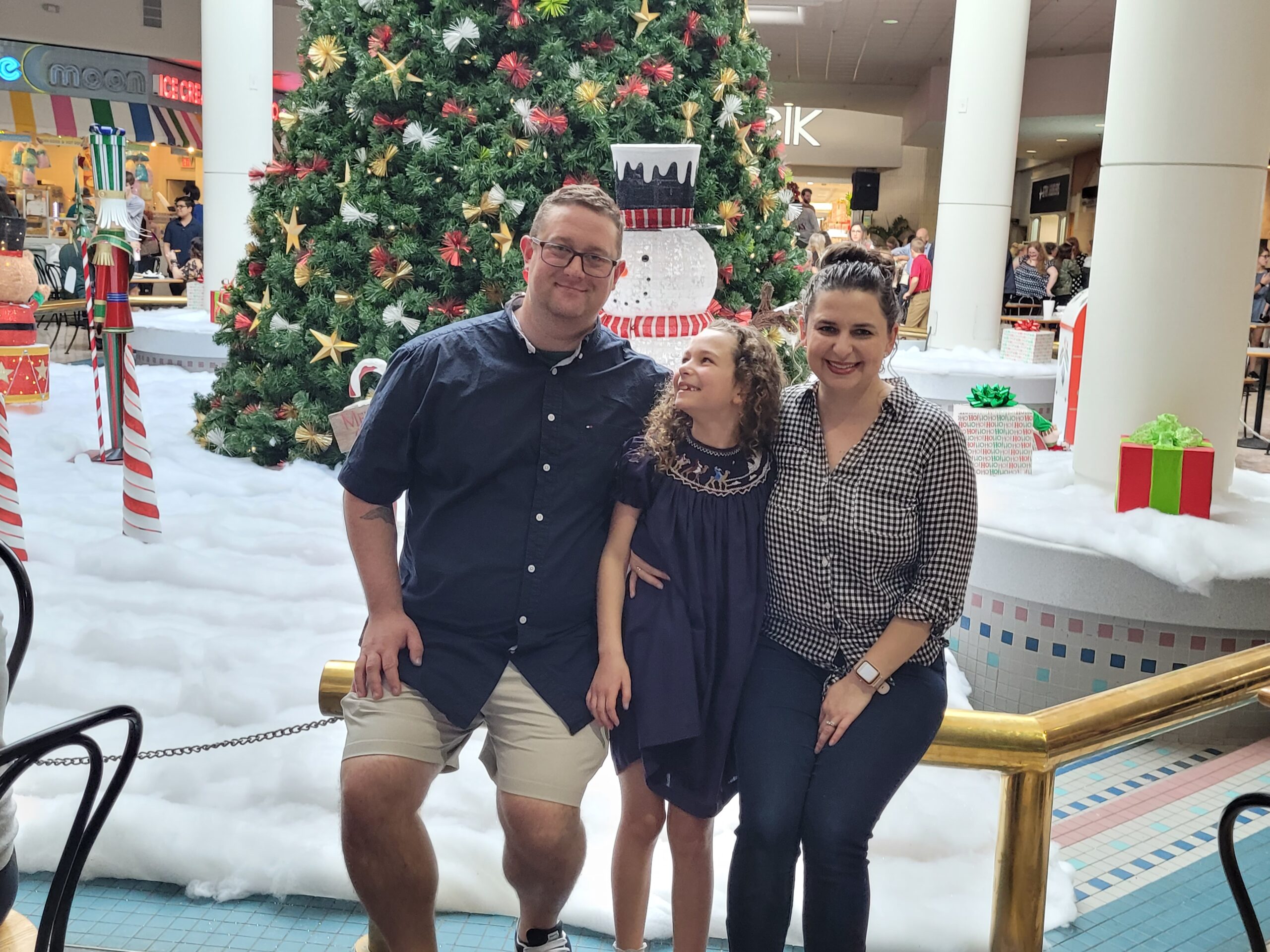 The next morning at church, Annabelle sang a song with the children’s choir and our family did the Advent reading and lighting on the candles. I did not do the reading because have you met me? I do not open my mouth in public. I would consider performing a concert in front of six thousand strangers (NO ONE I know would be allowed to attend) after I spent all afternoon with wardrobe, hair, and makeup, but no way in heck do I want to read a passage from the Bible in front of our very nice church congregation. Christopher and AB read while I lit the candles. There was almost a catastrophe when I lost my balance while holding the flame but the building is still standing and Christopher’s hair wasn’t singed after all.

Joanna came to work with me one night. She made a teacher gift I didn’t have time to make and one small sign for herself to take home. I wanted to pick Joanna up and recreate the picture from when we were little in front of the paint but it didn’t seem like the right time. I’m sure my boss wouldn’t have minded, but Jojo wasn’t wearing her bonnet. 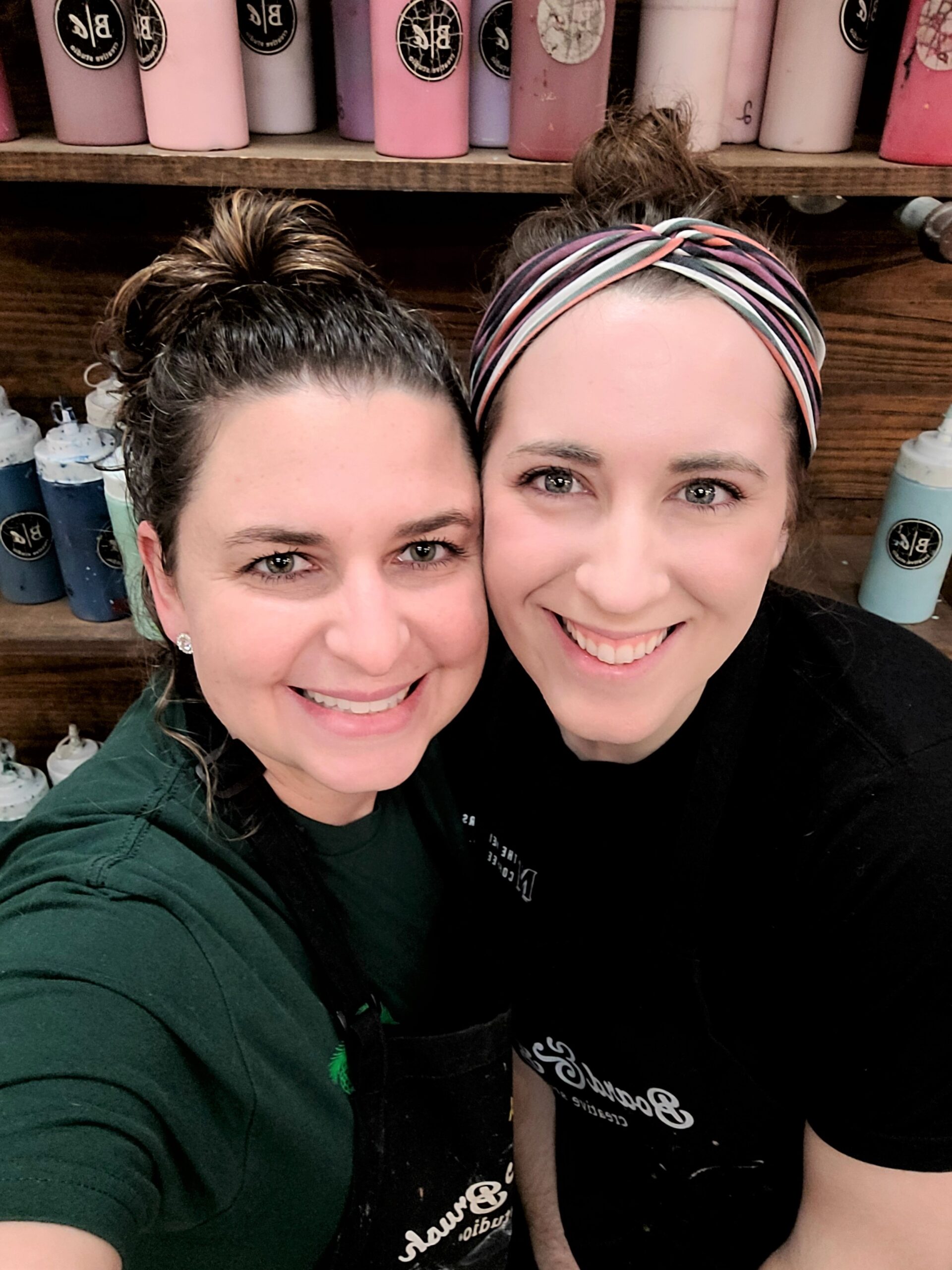