We spent the first half of January recovering from our travels and the second half recovering from the ‘rona. It hadn’t hit us since March of 2020 (we were trendsetters) so it was bound to get us again at some point. I’m almost relieved we have it out of our systems for a little while. Annabelle only felt sick for two days but it took me out for over a week. It seems like all we’ve done this year is get sick, recover, cancel appointments/playdates, make never-ending meal plans and school. 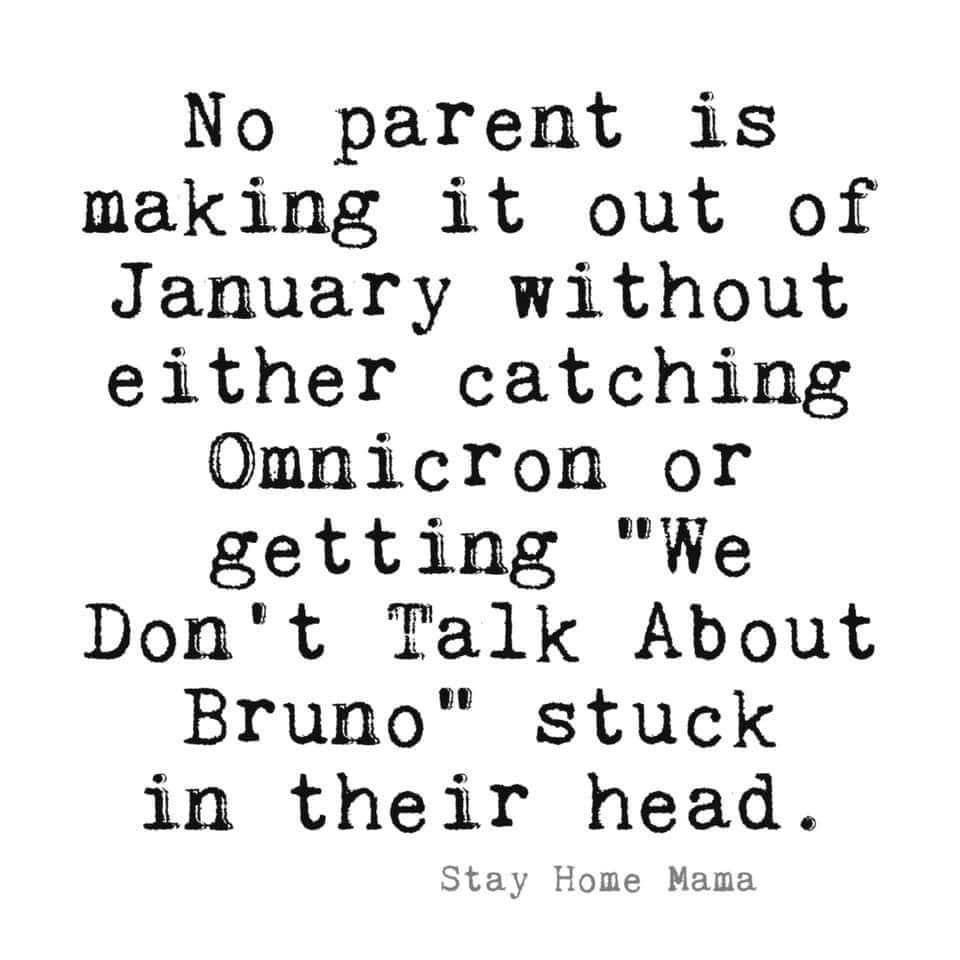 Listening to: the Encanto soundtrack seventeen times a week. AB listens to it over and over and over. I got Finley Donovan is Killing It and True to You on Audible but neither are keeping my attention. I’ve had a hard time concentrating on anything lately so they may be good books and we can chalk it up to user error. Whenever I need something mindless to listen to, I go back to my old faithful podcast Cartalk. I know nothing about cars or the bolts that attach the piston to the internal combustible engine but for some reason, I find listening to an hour of Cartalk relaxing.

Not enjoying: when the cats escape from the house. When we got home from church on Sunday, the living room doors were open and both cats were gone. We got Lucy easily but it took a good 30 minutes to get Linus George Krasinski back inside. He found himself a hole under the deck and refused to come out. We finally got him and not two hours later he escaped again and the whole process repeated itself. I almost put up a ‘free cats’ sign. They escape several times a week and it’s the only time the neighbors hear me yell.
“ANNABEEEEELLLLLE. YOU LET LINUS OUT AGAIN!”
“I’M SORRY MOM! I DIDN’T MEAN TO!”
“Don’t just stand there with the door open! Now Lulu is out too! There goes Linus under the shed. Grab Lucy! She’s about to go right by—never mind. You missed her.” 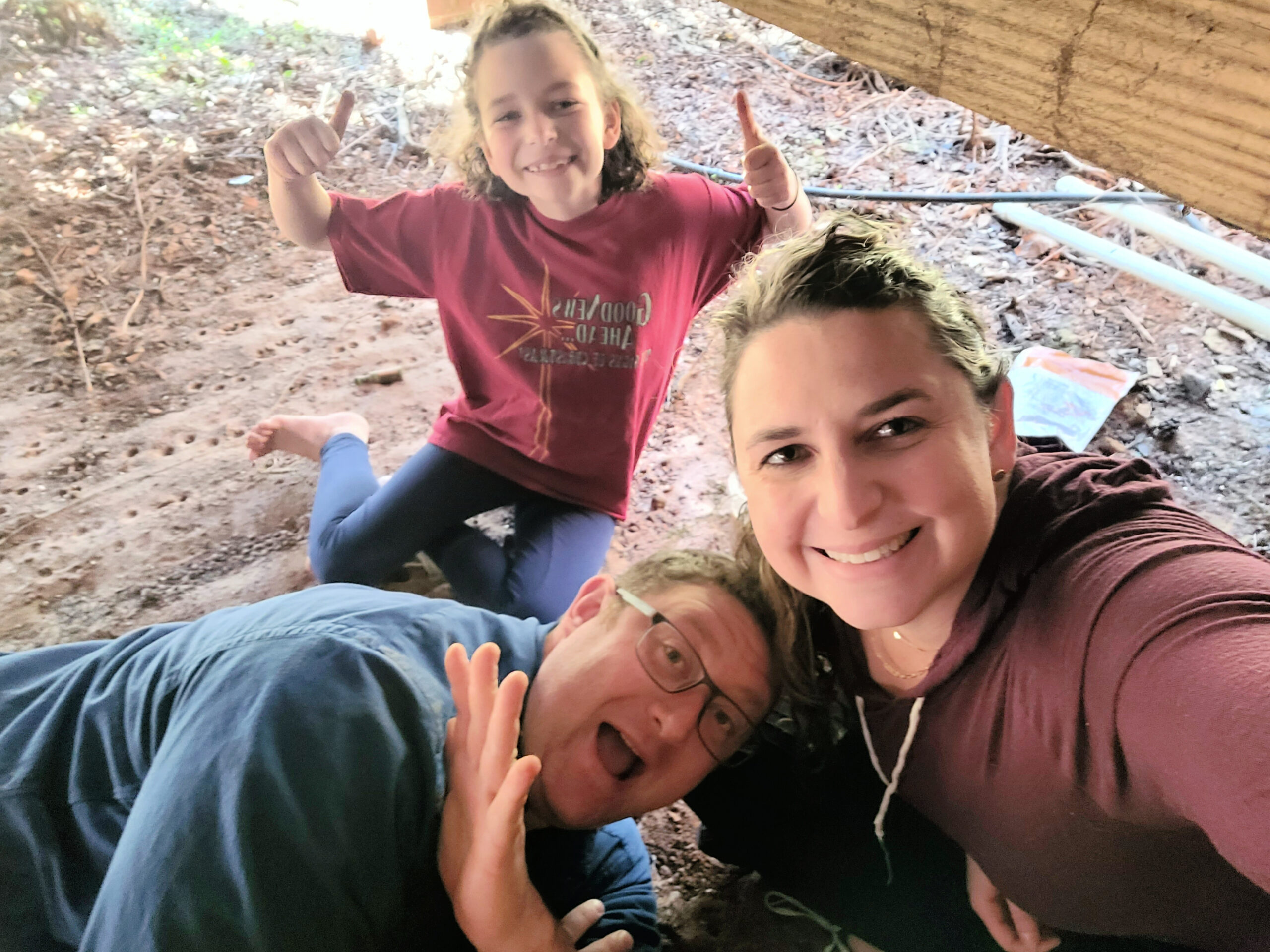 Crushing: my New Years’ resolution. I have no word of the year. I have no resolutions. My plan is to keep the bar of expectations as low as it can possibly go. My one and only goal for this year was to buy new soap dispensers for the downstairs bathrooms. I crossed that off on January 1st. It might have even been the night of December 31st. We might be headed towards year 16 of this shandemic but we’ll do it with pretty glass bottles.

Showing off: Oliver. I don’t have anything new to say about him but he’s deliciously cute and the world needs to see more of him. When we were in MA, Sesame and I babysat him while Daniel and Erika took Ivy to Boston for the night. Oliver was not as excited about the sleepover as we were. He was very upset his parents would leave him with people who did nothing but dote on him and cater to his every need. He cried most of the time and said “mama mama” in such a pathetic little voice. I knew I had to do something big to turn the ship around and make him like me. I had to redeem the sleepover! We took him to the free zoo (pet store) for the first time in his life and he was as thrilled as an eight-month-old can be. 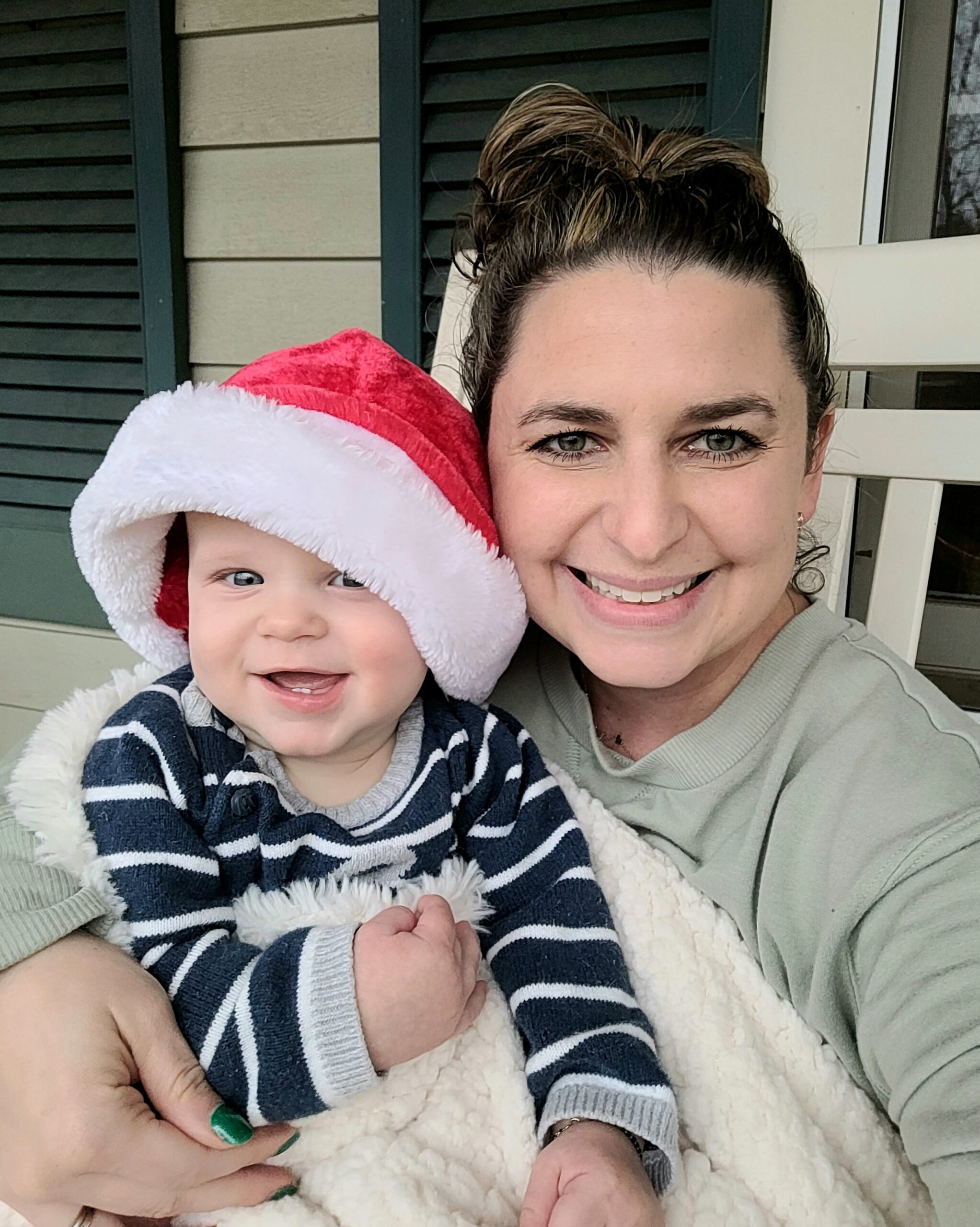 At one point I told AB to watch Oliver in the living room while I used the bathroom. I specifically said to make sure he didn’t eat any of the Christmas tree needles on the floor. She came to the bathroom door to tell me that he was trying to eat the tree but she had given him a piece of tissue paper and told him, “I’m trusting you not to eat this paper while I go tell my mom you’re still eating the tree.” I appreciate her trust in him, however misplaced trusting in a teething baby to not eat a piece of tissue paper may be.

Watching: any shows I can find about cults (or “religious groups that are exclusive and full of rules but not a cult”) and Sweet Magnolias. The topics could not be more different but they both fill a hole in my heart. Several of my friends here are personally offended that the characters on Sweet Magnolias don’t sound authentically southern or use the right southern phrases. Most of the characters don’t sound southern to me and the ones that do sound southern sound like the friends who are offended.

We’re still watching Marvel movies. I’ve told Christopher numerous times that we’ve seen all these movies at least three times each but he insists we have not. We have. I know for a fact that we have. We’ve been watching them for the last 11 years. Why do we keep watching them? Because someone who will remain nameless but whose name rhymes with Farah gets very confused about what has happened in past movies. Christopher doesn’t appreciate many questions being asked in the movie theater so we’re trying to get ahead of the game by rewatching them all now before the next big movie comes out. Questions include but are not limited to:
Why does Loki’s hair always look greasy?
Why is Black Widow considered a superhero? She is extremely annoying and I have no use for her. No one can fight like that while wearing heels and not even having her hair in a ponytail.
Why did they kill off Jarvis?
Why does no one pay attention to Hawkeye like they should? He doesn’t have greasy hair.
Why did they kill off Tony Stark?
Why is Doctor Strange showing up again? He’s rude, has a terrible attitude, and is a selfish stick in the mud anytime he’s on the screen. Why does he survive when Matthew Crawley did not? (Downton is a totally different universe but I never miss a chance to bring up Matthew’s death.)
Who’s that character? What do you mean we learned that character’s backstory in the first iteration of the series directed by so and so in 2009? Do you think I can keep up with other universes when I can barely keep up with what’s happening on this universe?

The same person who continually rolls her eyes and sighs has so many opinions about said movies that you might be led to believe that she is more invested than she cares to admit. You would be correct. I was very upset when my beloved Captain America handed over his shield to a new man. WHY DID HE DO THAT. I will never love another Captain America as I loved him. Don’t come near me with your talk of a “new generation” and “the story must go on” and “plotline development.” Plotline Shmotline. Chris Evans is where it’s at. Yet another new Marvel series has hit Disney+. I’ve been told it’s the same universe as the other movies but on a different timeline or some such nonsense. Or maybe it’s the same timeline but a different universe. I zoned out when I was being told. I have drawn the line in the sand and declared I will not be watching it. Does it have Captain America? No. Thor? No. Iron Man? No. Is Chris Pratt singing and dancing while he hunts for aliens? No again. Then adios, Marvel. I won’t be spending any more time with you. I can’t watch movies where the characters shoot beams/lasers/fire out of their hands and/or eyes. I have a one-character limit for that and the new series has several hand-shooting characters so I will not be participating in that viewing.

Loving: my new purse. I’m not one for name brands, but I am one for sparkle and shine so when I saw a sparkle Kate Spade bag on sale for 70% off I fell in love. I never make large purchases but I thought I would make it my splurge of the decade. Immediately after I showed it to Christopher online it went out of stock. I took it as a sign to stick to my TJMaxx purses. Imagine how delighted I was when Christopher got it for me for Christmas. He’s the reason it went out of stock. You could say sparkle is my signature color. 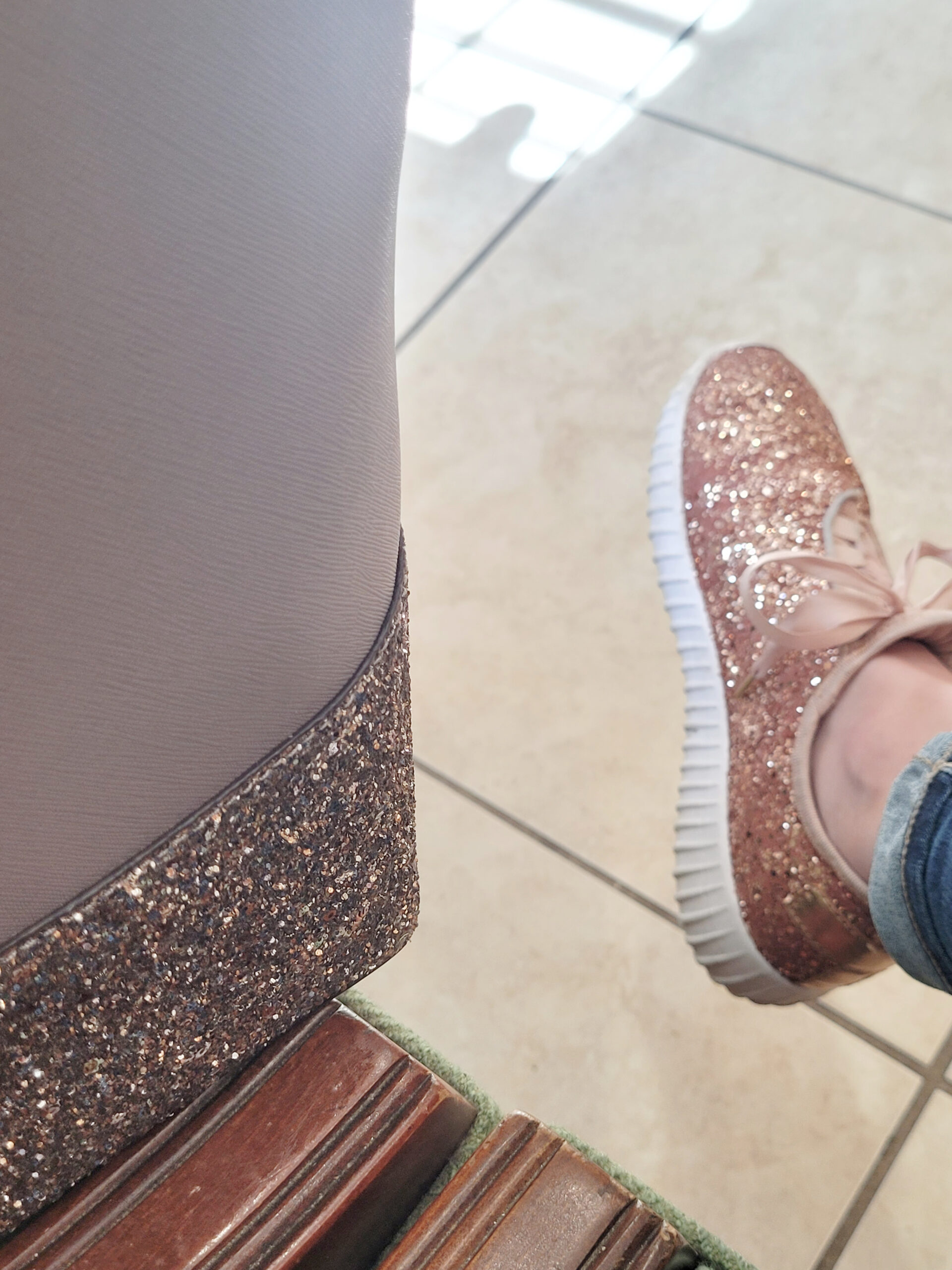 Organizing: everything that stays still long enough to be organized. I picked up some new organizing bins and baskets and went to town. I organized my makeup drawer at 9:30pm. I’ve watched videos about under kitchen sink organization and efficiency. I’ve bookmarked several different styles of clear containers. Perhaps I should spend a little extra time organizing my hair. Annabelle drew this portrait of me and I can’t say it’s my best look ever. 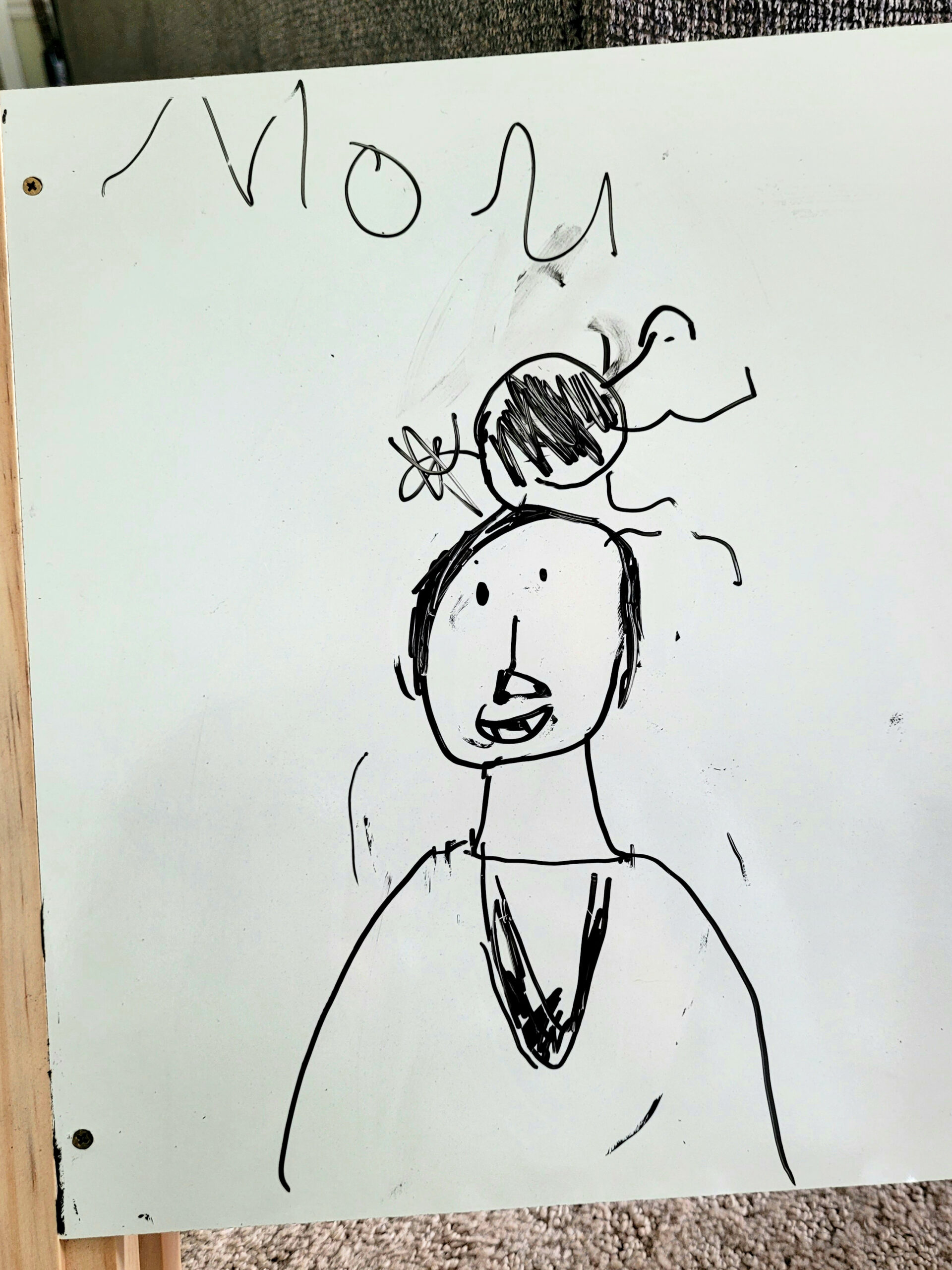