VBS is in full swing at church.

The theme is Making Waves for Jesus and we created an underwater extravaganza with coral reefs, waves, and a jellyfish wall. 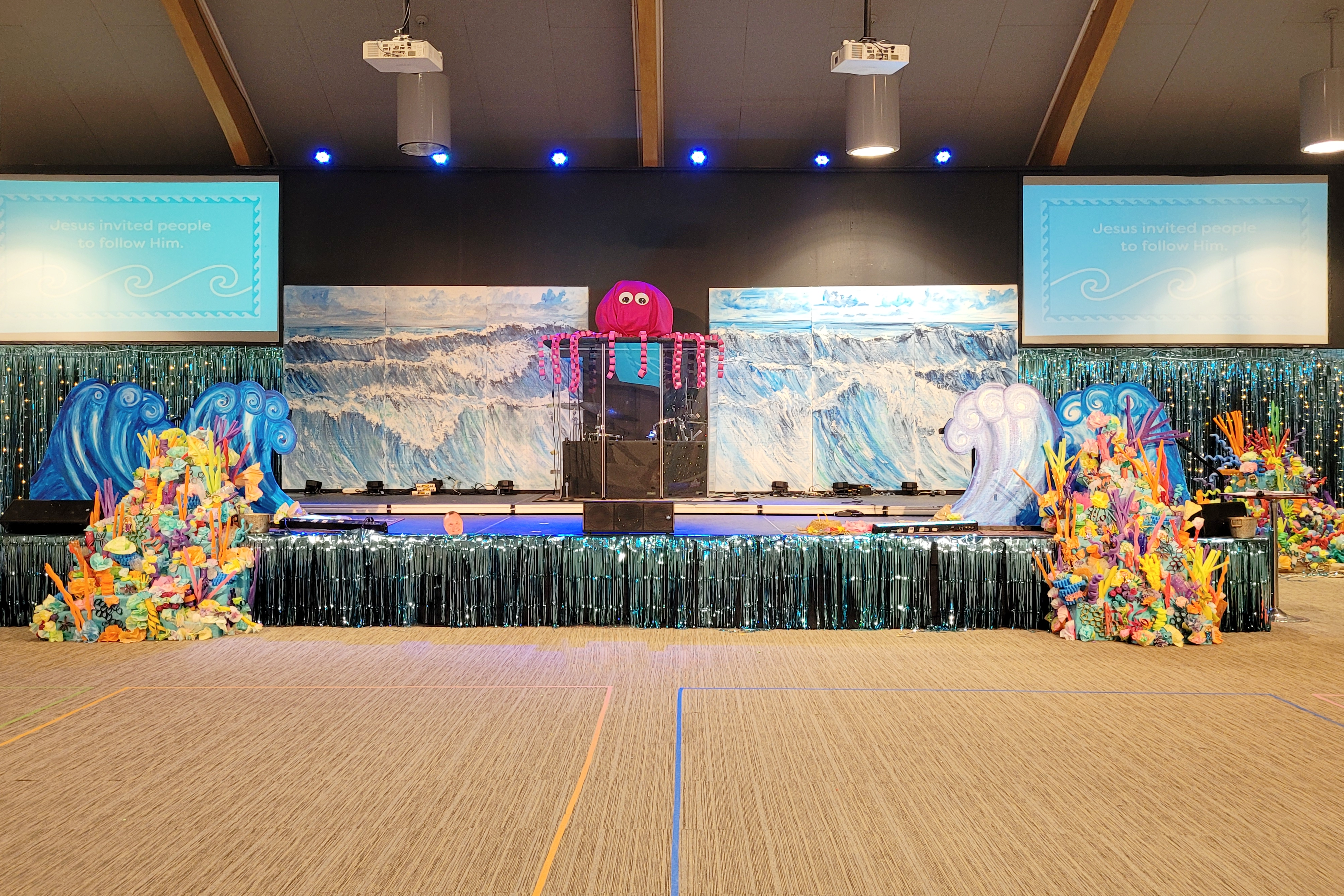 I was helping with behind-the-scenes things so I didn’t do much of the flashy decorating, but I did hang the blue water around the stage and under the left screen. As I predicted, the kids loved Mrs. Jimmy the octopus, the little creatures in the reef and hand-painted murals much more than my shimmering waves that are getting more flimsy by the day, but no ocean life would be possible without the water so in a way my handiwork is the most important. 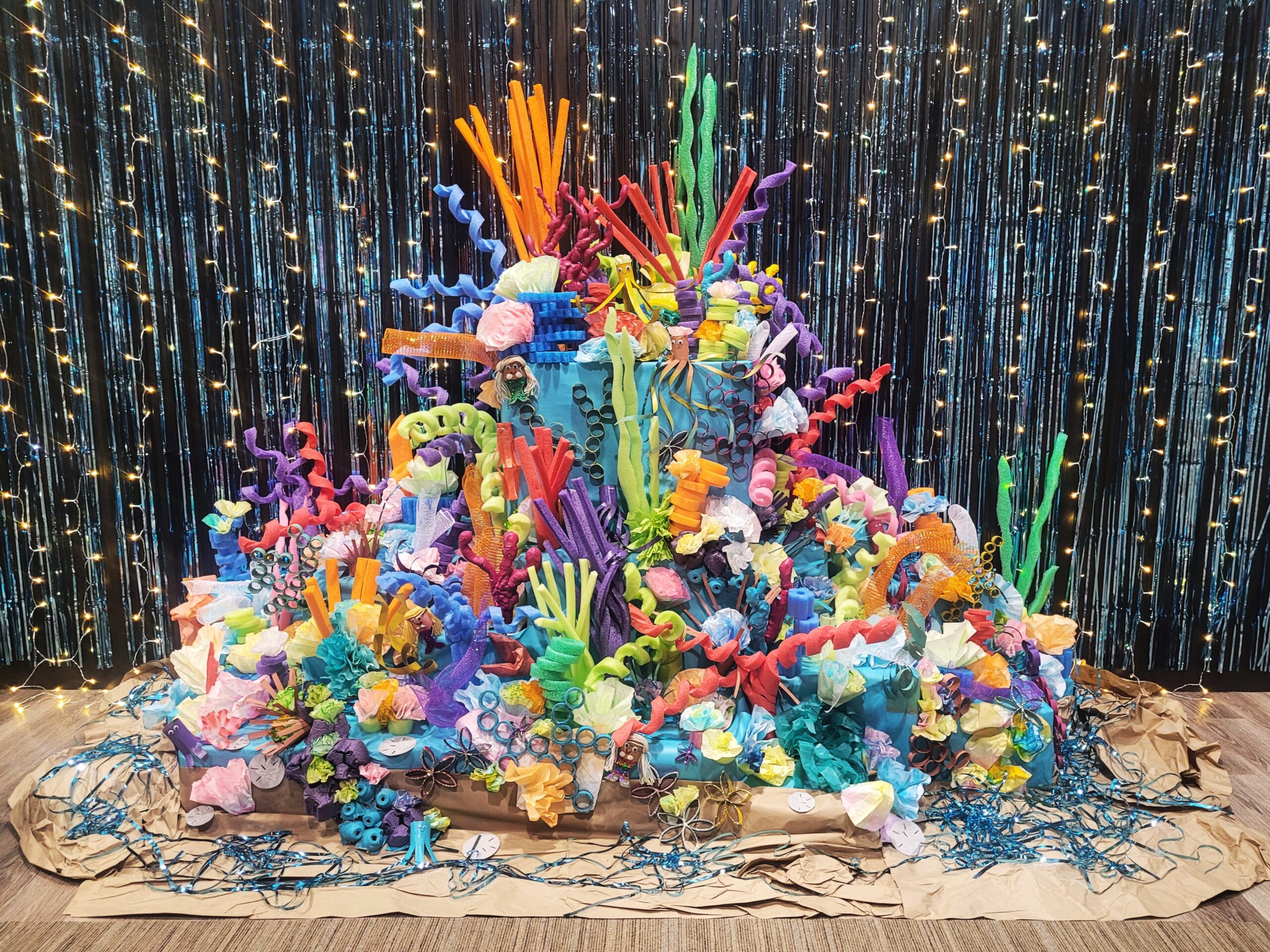 AB has an up-and-down relationship with VBS. She hates loud noises and yelling so she spent most of the large group time the first day in the back of the room covering her ears. Once we break up into smaller groups she enjoys it more but she still has a limit on how much stimulation she can handle at one time. Yesterday during large group time (the loudest part of the day) she helped me do check-in for my kids which distracted her from the noise and this morning she was with her friends so we’re making progress. She likes seeing the kids and playing the games but she’d like it better without screaming. 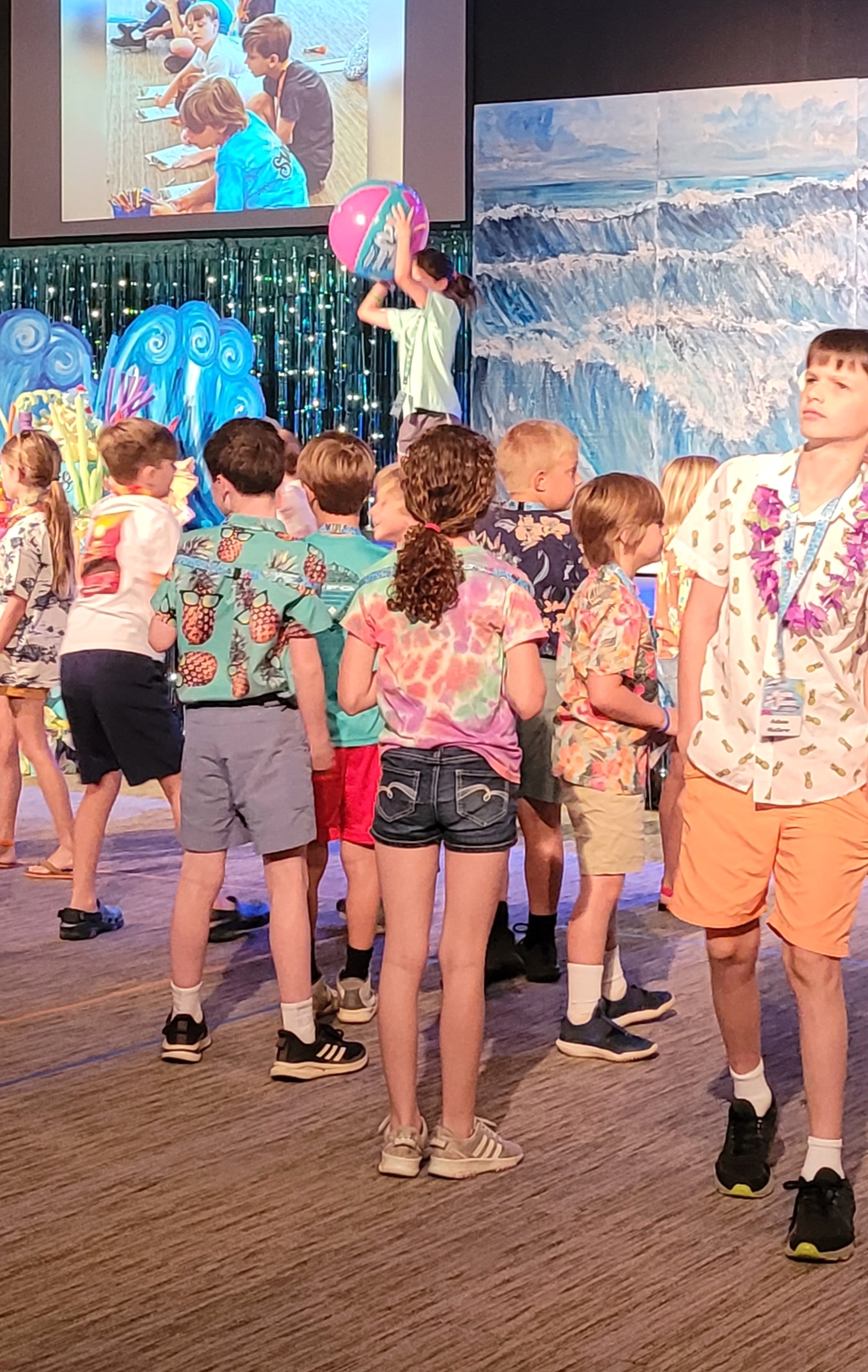 Last year I was the snack lady with the other Sara. Everyone loves the snack ladies. We didn’t ask hard questions and we handed out goldfish and cookies. What wasn’t to love? We did such a fabulous job we both assumed we’d be snack ladies again this year, but no such luck. Kati and Kelli are the snack ladies. Instead of working off a little cart like we had, they have a cart, two round tables, and a long table decorated like a tiki bar (or “snack shack” since we’re in church). It’s fine. Sara and I aren’t jealous. We walked so they can run. At the planning meeting, the director asked that we write down what role we were interested in this year. I said snacks or anything job except being in charge of something. I’ll be an assistant all day long but I really didn’t want to be a leader. Guess what j-o-b I have. A leader of 15 first graders. My teacher hat is on and I am in full leader mode. We are the most organized and well-behaved group. We do have the VBS problem child but we have him under control for the most part. Two older ladies are helping our group and I have a suspicion the director put me with them because I have young eyes. Neither of them can read print smaller than size 20 font so they can’t see names on the clipboard or read the regular schedule. One of the ladies got herself a large print schedule that they hold up to the light and still squint to see. We also have three youth assistants with us all day so we’re quite the parade going down the hallway.

Kids across the country are all the same. They all have the ability to get completely off track. Each day we sit through a half-hour carefully thought out Bible lesson and without fail, someone raises their hand and says something along the lines of, “Mr. Wesley, my sister has a boyfriend” or “Can I go to Sonic when I leave today?” I can sense the unrelated questions coming from six miles away. Four kids will raise their hands and when I ask if anyone has a question related to Mr. Wesley’s lesson, all four hands go down. My eyes may be young but I have years of seeing through kid shenanigans under my belt.