For 21 years I lived in the same bedroom in the same house in the same state. My life was orderly and mostly predictable. Then I met a soldier who proposed within four months of meeting me and carried me off into the exciting, crazy world of the Army. 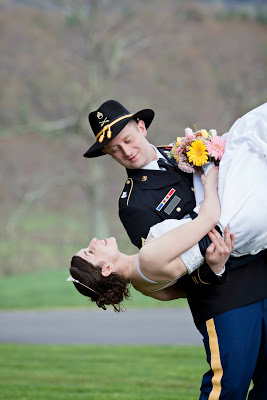 Or more accurately, carried me into a world of unknown acronyms, long separations and lots of hurry up and wait. In the first five years, we’ve moved seven times and lived in six homes across three states. I’ve become a master at packing and can bubblewrap a plate like nobody’s business. We’re now heading towards a decade of marriage and are living in our eighth home deep in the heart of the humid south.
I’m from the north and he’s from the south. I have four siblings and he has one. I drive an automatic and he drives a standard. I love snow and he hates it. I love the dishwasher and he likes hand washing. Despite our vast differences, we produced the world’s most adorable child. She answers to Annabelle, AB, Belle Belle, Sesame and Annabelle Sesame Lee. She’s so sweet I could eat her up with a spoon.

Still nosy and want to know how we met? Look no further- Part 1 and Part 2. Yes, it’s in two parts because brevity has never been a strong suit of mine.