Keep It or Kick It

Just like we did twice last year and twice the year before that, we’re packing up all our belongings and moving. Thank the Lord we’re only switching houses and not states because I really can’t be put through the stress of adjusting myself to the layout of yet another new Walmart.
We began the house hunt on Monday and while we were looking at the second house, I decided that we should be the stars of a new HgTV (or TLC, I’m really not picky) show. I’ve already made an advertising picture so all the producers need to do is send over a few cameras. Christopher I came up with a name. 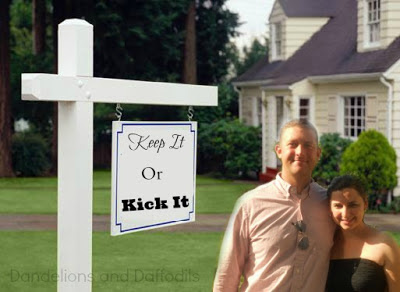 I had never been house hunting before and I decided that as a whole the process is enjoyable. (Until you’ve looked at 82 houses online and you start to think that living under a bridge might be the easiest option. I can say from experience that all bonus rooms in this town look alike.) My favorite thing about house hunting? Being nosy is accepted, even encouraged. Normally people wouldn’t appreciate if I open all their doors or look in all their closets, but Erica the realtor says to look around and I take full advantage of the opportunity.

I’m sure Christopher would agree that the biggest decision in our lives right now is not where we’ll live for the next four years, but what we’ll be wearing when our show debuts.