Subtitled: It is Never this Neat

I never got AB’s room at our last house finished before we moved to this house. I had the same bedroom for 21 years and she’s on bedroom number four in six years. She had no zero input on the first two rooms and a moderate amount in her yellow bird room in the last house, but she had opinions about this room. She requested it be “history and nature themed.” There is no such category on Pinterest. It’s not completely done but it’s coming together.

This is what I see when I walk in the doorway. I got Florance Flamingo from Tarjay Boutique. 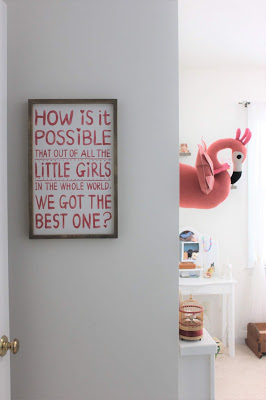 Her door is decorated with hearts from last Valentine’s heart attack. 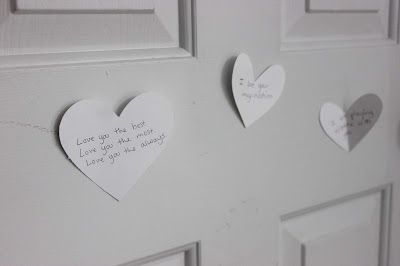 SHE HAS A CHANDELIER IN HER ROOM. I wanted a chandelier in her nursery and Christopher said no. I’ve asked about putting a chandelier in every room since with no luck. When we were looking at this house I saw the light and almost signed the check on the spot. 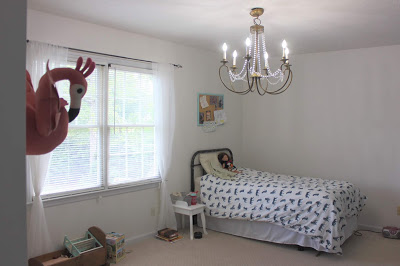 I haven’t decided what to put on the wall to the right of her bed. I also want to get a blue or jute rug but I haven’t found one yet. I’m terrible at buying the right size rugs and curtains. I needed a rug for the upstairs hallway and found this one on clearance. It seemed long enough in the package but I was mistaken by about 6 feet. 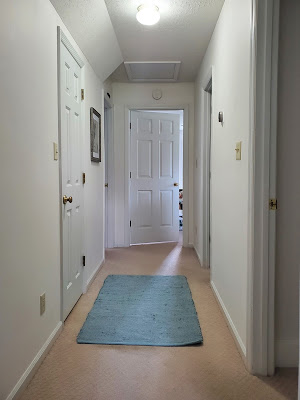 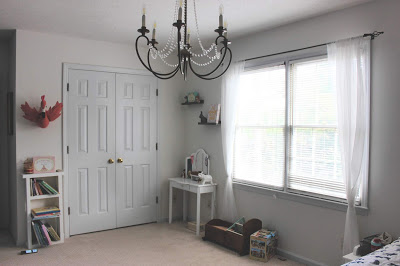 Long gone are the days of carefully placed knickknacks and sentimental items of my choosing. Part of me wishes I could do the whole room in my way but it is fun to see what’s special and important to here right now. On her vanity from Oma she has two figurines she painted, a postcard we sent ourselves from St. Thomas, a letter from the Tooth Fairy, an ornate pen box with a piece of foam in it, and a little baby Jesus from a random nativity. 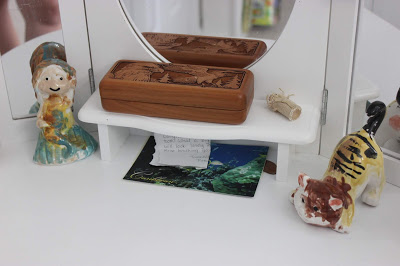 I put the bulletin board up recently because she taped Frozen pictures on the wall like a girl with boy band posters. She still sleeps with Memere blanket and anywhere between zero and seventeen stuffed animals. I got the leopard blanket on sale at Ikea when we went to visit Katie. AB has since decided she prefers tossing the blanket on the floor when she goes to bed which is annoying. It takes a long time to get the duvet insert in the duvet cover and she could at least pretend to use it. She hoards so much under her bed and between the bed and the wall. She loves turning tissues and toilet paper into things for her stuffed animal friends. She puts “very special to me” rocks and sticks under the bed and always has pipe cleaners on the floor. 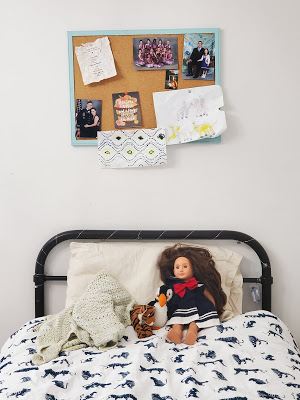 The pièce de résistance is the accent wall that covers the nature theme she requested. In the beginning, I envisioned a field with a few deer and trees. Elizabeth was here when we did it and as things generally go with her, we went off the straight and narrow path down into the jungle on the side of the path and ended up with a mountain scene. They’re hard to see, but I hung little birds from the ceiling in front of the painting, We will now look at the same wall from three different angles. 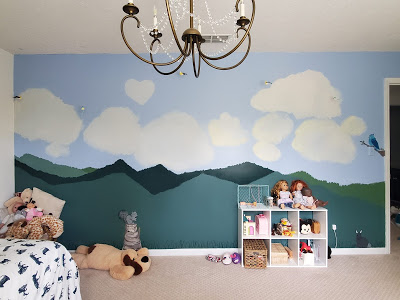 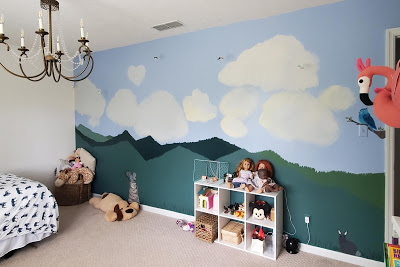 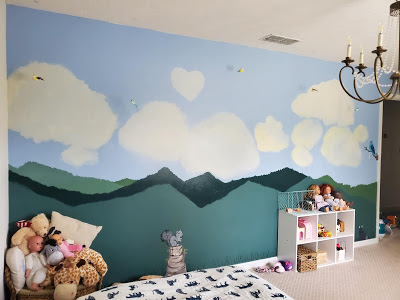 Elizabeth free-handed the squirrel. I traced a rabbit on the wall by the door and have been too scared of messing it up that I still haven’t painted the mouth on it yet. 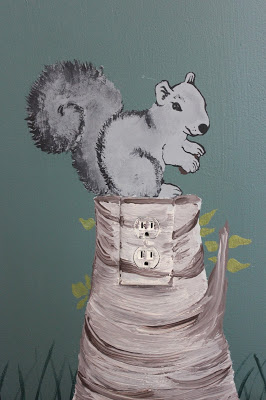 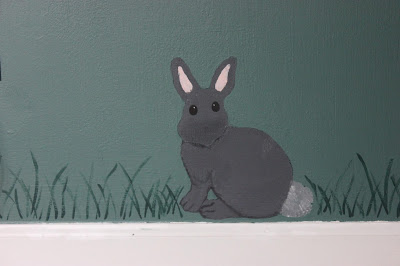 She hasn’t mentioned wanting more history in the room so I haven’t brought it up. I’ll never repaint over the accent wall so in 7 years the wall will be old news and we can check the history box.