We’re T-minus three weeks out from moving to our next home.

Normally at this point, I’d be packing and have boxes stacked up around this house. This time the Army is moving us so all I have to pack is what we’ll need between leaving here and arriving at the new house and various special things we want to pack ourselves. I very much feel like I’m in a state of limbo.

Speaking of the new house, finding one has been An Ordeal. It’s been the dramatic second season of the hit HGTV show Keep It or Kick It. 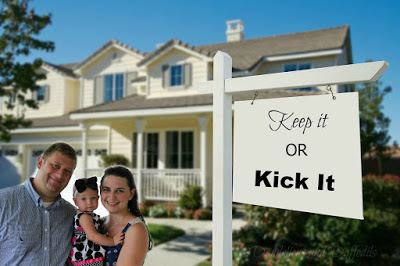 A few weeks ago Christopher flew up to our new state for an exploratory/house hunting trip. Normally I’d accompany him but the flights were so expensive it didn’t make sense. I supplied him with a detailed list of what I’d like in a house:
* a yard
* good spots for Christmas trees
* close to Dunkin Donuts
* a front porch and/or back deck

I believe that covers all the essentials. It didn’t occur to me to add bathroom with shower or no houses with coin-operated laundry machine to the list. You wouldn’t think in 2015 we’d have to specify that we want a house with a shower but Christopher looked at a house that didn’t have one. Obviously, we’re moving to a place that values cleanliness.

Long story short, he looked at over 20 houses and finally settled on a house with not one, but two showers. It had a Buddhist shrine in the office and was painted colors straight out of Bollywood but it was nothing a few coats of paint and 15 pinterest boards couldn’t fix. A week later that home fell through and we were back to square one. We didn’t have time to go back up to look at homes again so we had to decide between moving without a home or picking one site unseen. We went with the latter option which doesn’t make me one bit nervous. ON OPPOSITE DAY. If it’s terrible I’ll be sure to snag a few of the best packing boxes from the movers and whip us up a cute cardboard box house to live in on the side of the road.