AB’s anniversary gift to us was tears

I spent three days last week taping, priming and painting a wall in the living room. It seemed very deja vu which it was because I did the same exact thing when we arrived two months ago. We had painted an accent wall brick red but after a while, it started to feel like we were living in a fire station. Since we had just done it I assumed I’d worked out all the kinks then and it would be a breeze to get done. I had planned to wake up early and get some painting done before AB woke up. It never happened. I woke up late, a can of red paint spilled in the laundry room and went under the washing machine and Annabelle’s feet and legs got covered in non-washable primer. We went to the store for a break and to buy the paint. There wasn’t a salesperson in the paint department and Annabelle had a meltdown as we were checking out. Needless to say, it wasn’t an easy breezy painting experience. I painted the wall green and Christopher keeps saying he wants to paint pieces of chocolate on it because it looks like mint chocolate chip ice cream. That’s exactly the look I was going for!


We celebrated our seventh anniversary on Saturday, a day early. We hadn’t gone on a date since last year so it was high time we hit the town without our third wheel. We actually did the farthest thing from hit the town. We went to Jimmy Carter’s boyhood home. Normally I’d save historical trips for non-romantic days but as we never have a babysitter we seize the day on any activities. Plus my goal of becoming first lady is always at the forefront of my mind and being seen at a historic site is good for publicity. 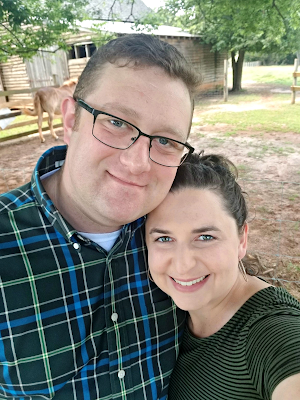 The lady at the gate said we missed seeing Jimmy at by only a few hours. I’m always two steps away from fame! The farm was really pretty and we enjoyed strolling without answering questions about what squirrels eat and if we could ride the horses. That didn’t mean we had completly intellectual conversation. I couldn’t get over the cleanliness of the chicken coop. You really CAN have a clean chicken coop! How pretty! Look at the clean chickens! Christopher took one look and said, “You can have a clean coop if you have the whole of the National Park Service and government funding to clean it for you.” Good point.

We saw this sign and I immediately cleared my schedule on all those Sundays. Christopher said we shouldn’t turn our days of worship into days of chasing celebrities. Sometimes I get the feeling he doesn’t take my political aspirations/celebrity meetings seriously. 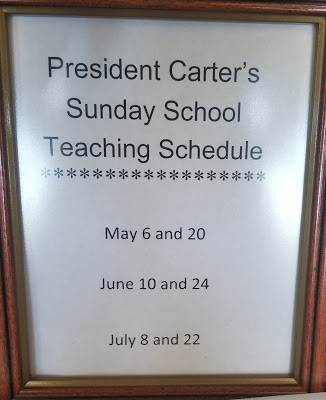 For supper, we went to a fancy restaurant that opened in the late 1800’s. I made a reservation which was completely unnecessary given that we were the only ones there. Usually we eat at restaurants that give little black buzzers when you show up so I always feel fancy making a reservation. The restaurant was beautiful and I felt like someone from Downton Abbey was going to walk in at any moment.

The traditional gift for the 7th anniversary is copper. Christopher never wears sunscreen so I thought about getting him a bottle of Coppertone and calling it a day. I ended up gluing pennies from the years we were born, met and married into a wooden heart-shaped frame. Partway through making the gift it occurred to me that pennies might only be copper coated and not 100% made of copper but I didn’t research it. Ignorance is bliss and I didn’t want to come up with a new gift at the eleventh hour. He gave me a rose gold copper pineapple tumbler that I love. I have such a rose gold obsession right now.

Our week so far has been a combination of lost patience (me) and an unnamed child who has decided it’s cool to recreate the terrible twos (which she never had in the first place) and the moodiness of a preteen girl. She cries about everything. She cried because I didn’t remember the same thing as her. She cried because it was too warm to wear her footie pajamas. She cried because we had to wash her clothes. She keeps telling me she misses her old school and friends so I know she’s still adjusting to the move. I just wish her adjusting wasn’t so painful for all of us. Her allergies have been horrible here too. She gets welts the size of nickles from ant and mosquito bites. Something irritated her face and her eyes swelled up. She still manages to be cute with a swollen face which I never do.

She’s also big into making messes. I don’t know why I bother cleaning the house during the day. My toy organization system in useless. If only I had the National Park Service and government funding to clean for me.