Ten years ago today we got engaged. There is no photographic evidence because Christopher didn’t tell me to bring my camera and apparently it was before I had a camera phone. It’s fine! I don’t wish multiple times a year that we had photos from that day! That once in a lifetime event! To commemorate this occasion, I would like to share some marital moments.

First off, we have a long history of morning alarms. When Christopher was in the army he’d frequently get up at 3:30 or 4am. To ensure he actually did get up, he’d set several alarms in five-minute increments. The alarms would start going off half an hour early and if you’re doing the math at home, that was seven alarms while the moon was still high in the sky and I was still trying to sleep. These days the alarms aren’t quite as early but boy oh boy are they still the third member of our marriage. I drag myself out of bed to get AB to school at the same time he drags himself out of bed to get to work. We each have mul ntiple separate alarms and sometimes they go off at the same time but sometimes they don’t. It’s a terrible symphony that no one wants but we get every morning.

Speaking of mornings, when we were first married I’d stay in bed until Christopher got home from PE. The second I heard the key in the door, I’d hop up and start making the bed and acting like a modern-day Proverbs 31 woman. I wanted him to think I had made fresh bread and jelly from homegrown strawberries instead of squeezing in every minute of sleep. How cute. I would never do that now. I couldn’t even if I wanted to thanks to the aforementioned alarms.

I am nothing if not a product junkie. I will take samples of any and all lotions, potions, creams, glosses, makeup, and hair products. I love spending $19.99 at Ulta so I can get a free 5-piece sample bag. There are many parts of my body I’d change but a real thorn in my side lately (aka the last eight years) is my double chin situation. It’s out of control and I cannot be more unhappy about the situation. I researched my options and found a great solution, but unfortunately, it costs $1,000 per shot. As I have neither won the lottery nor been left a large inheritance, I had to bookmark it for another time. Instead, I found what I hope will be the foundation of neck youth. It is a neck firming, anti-wrinkle, saggy neck tightener and double chin reducer anti-aging moisturizer. All this can be yours for the affordable price of $26! I had hoped for instant results after one use but beauty and perfection can’t be rushed. I have been applying it faithfully so I expect to look like a new person any day now. I told Christopher I saved us $974 by not getting the shots and you know what he did? He pulled up the definition for snake oil and read it to me while I applied my neck firming, anti-wrinkle, saggy neck tightener and double chin reducer anti-aging moisturizer. “You would have bought anything that a traveling salesman sold on his cart in the 1860s.” Don’t rain on my cosmetic parade! Guess which one of us will have the neck and chin of a supermodel when we’re both old and in the nursing home?

The short cold snap has finally arrived so we’re taking every opportunity to make fires in the fireplace. They have not been roaring successes. They’ll have flames for a few minutes until the starter log burns out then smoke for the next several hours. We cannot get a good fire. This is particularly annoying to me. I want a cozy fire, not a smoldering fireplace. I’ll rearrange the logs, fan the tiny flames, add a second starter log but have very little success. Christopher doesn’t take it as seriously as I do. He’ll sit on the couch reading memes while I give a running commentary on our subpar fire. Eventually, I decided that the wood was wrong and I’ve been promoting this theory for several weeks. His response was, “I don’t know. I got the wood at the gas station. It’s from a tree farm so how can it be wrong?” I don’t know the details of why the wood was wrong but it was the only thing that made sense. Every time we made a fire it was with wood from the same place. “You keep buying wood from that’s been sitting outside a gas station. Maybe it’s gotten wet.” “It’s in an enclosed box protected from the elements.” For someone who wouldn’t think it odd to research which paper towels have ranked the highest in maximum absorption in a nationwide study, he wasn’t taking this seriously. I was getting so passionate about the wood being the culprit that I took a picture of the “wood protected from the elements.” 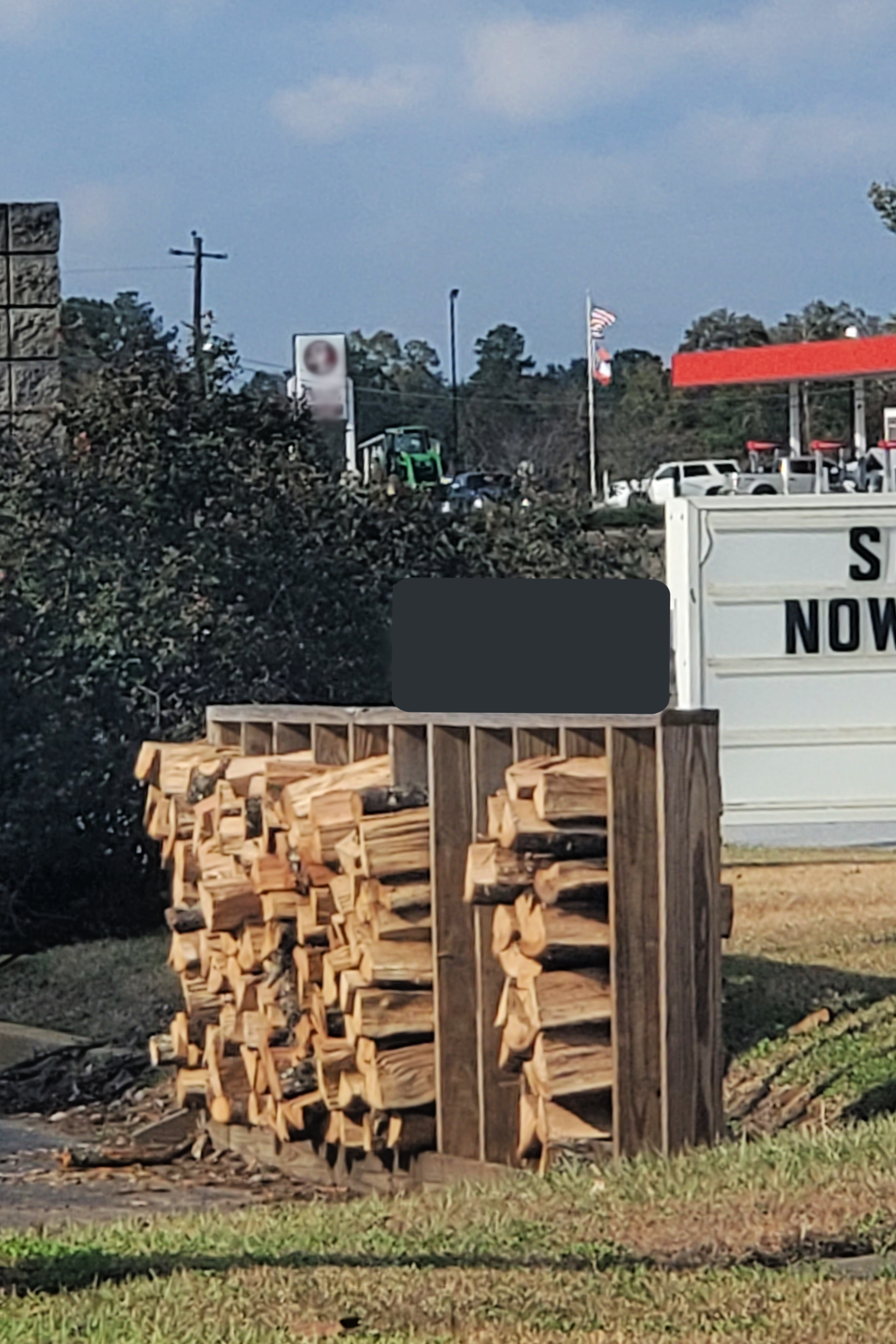 Let’s zoom in for the people in the back. Where is this enclosed box of which you speak? 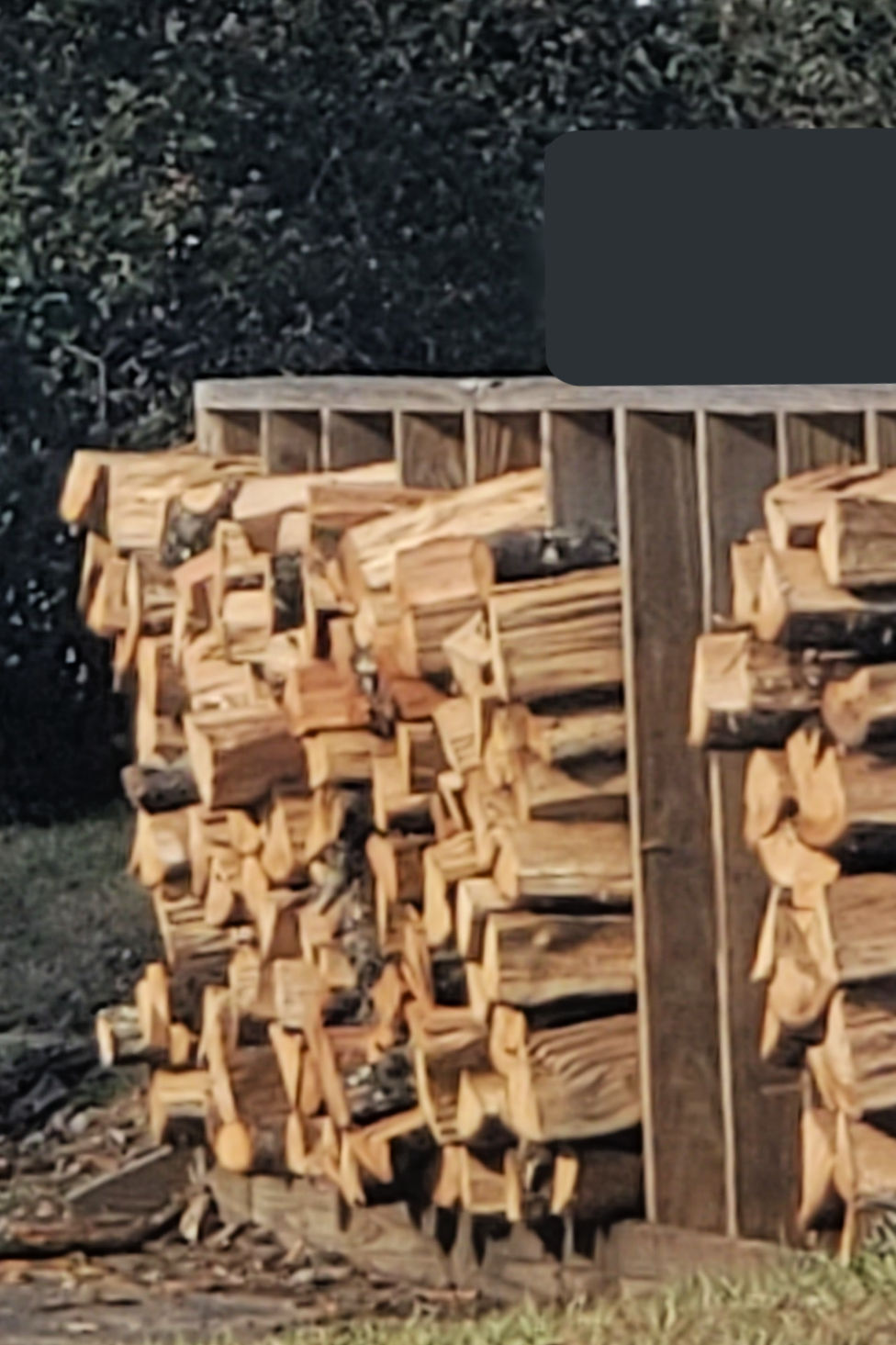 This debate reached a peak on Saturday. We made a “fire” again and it was not, as the kids say, lit. I texted Elizabeth about this marital disagreement and as expected, she was very sympathetic. “He’s a soldier. Didn’t they teach him to make fires in training? He didn’t research it? You think he might have watched seven videos about fire making for his family, but actually, he was catching up on the value status of the US dollar vs the British pound.” She has a close-up view of how our marriage works. I told Christopher what Elizabeth said and a few minutes later I hear a guy on youtube saying, “Today I’m going to show you how to make the perfect fire. It’s very important to know about the wood you’re using. Be sure to purchase seasoned wood.” Then, from the corner of the couch, the one to whom I am married said nonchalantly, “Well, I guess we should get different wood.”

THAT’S WHAT I WAS SAYING ALL ALONG. Why did we have to get confirmation from random Doug on Youtube? Should we get Doug’s opinion on my neck firming, anti-wrinkle, saggy neck tightener and double chin reducer anti-aging moisturizer?